While a vast majority of the world's population has access to mobile phones, one third of humanity – some 2.5 billion people – do not have access to proper sanitation, including decent toilets or latrines, with dramatic consequences on human health, dignity and security, the environment, and social and economic development.

To address these issues, the “Sanitation for All” resolution, spearheaded by Singapore, was adopted by the General Assembly in July, officially designating 19 November as World Toilet Day. Marked by the international community since 2001, the Day aims to change both behaviour and policy on issues ranging from enhancing water management to ending open-air defecation, which 1.1 billion people practice worldwide.

United Nations Deputy Secretary-General Jan Eliasson has, on behalf of Secretary-General Ban Ki-moon, taken up the call to mobilize global action to effectively tackle the sanitation crisis. On World Toilet Day 2013, Mr. Eliasson spoke to the UN News Centre about why it is vitally necessary to make progress to improve hygiene, change social norms, better manage human waste and waste-water systems, and, ultimately, eliminate open-air defecation, which perpetuates a vicious cycle of disease and entrenched poverty.

UN News Centre: This is a topic that you are very passionate about. Can you tell us why water and sanitation is such an important issue?

Jan Eliasson: Well, I was Emergency Relief Coordinator for the United Nations in the 1990s and I saw what water and sanitation meant out there in the field; it meant life and death for millions of people. I saw children dying in front of me from diarrhoea, dysentery and dehydration and I said to myself ‘we have to do better.’ The Millennium Development Goal (MDG) area that is most lagging is sanitation so I feel its time for us to really mobilize and do something about this. Basically, its about human dignity.

UN News Centre: This is a topic that makes some people squeamish, however. Can you tell a bit about how World Toilet Day came to the United Nations as part of the [water and sanitation] MDGs?

Jan Eliasson: In some areas we need to break down taboos and talk about things in very realistic terms. That was difficult at first because the word ‘toilet’ was not so much a part of the diplomatic language. So we talked about ‘sanitation.’ Note that the latest words I want to introduce in the diplomatic discourse are ‘open defecation.’ People will raise their eyebrows but I think we need to bring the realities to the halls of the United Nations.

The figures are staggering: there are 678 million people that lack potable drinking water; 2.5 billion people lacking decent toilets. As a result, we have almost 2,000 children dying [worldwide] every day from diarrhoea, dysentery, dehydration, and sometimes cholera. I hope that the Member States and world public opinion could really rally and mobilize around this issue.

Singapore has played a very important role in this regard with Jack Sim starting the World Toilet movement, and getting a General Assembly resolution passed establishing designating 19 November as World Toilet Day. I think this is going to be very important in breaking down the taboos and making sure we get to the real problems.

UN News Centre: You touched on some of the figures, which are truly astonishing, so now, if you can, tell us what the average day is like for someone who gets up in the morning and doesn’t have a toilet.

Jan Eliasson: In so many countries, for millions of people, daily life is a struggle not only for food but also for water. We have the situation in the Philippines on our minds now, and I can just imagine the horrors people will face. This disaster has destroyed infrastructure, destroyed homes, destroyed water systems, wells and all the facilities needed for safe drinking water and sanitation. We will have women giving birth without any clean water around. This will pose a danger to life. We will have people dehydrating and people with horrible diarrhoea, which can take lives.

So, the daily life for so many people [without toilets or proper sanitation] is an unbearable struggle. We seem to forget that the General Assembly and the UN Human Rights Council established the right to water as a human right. We simply do not live up to this. I would hope that we could do this in the name of dignity of life for so many millions of people.

The call for action on sanitation includes a call for action to deal with the issue of open defecation. Some 1.1 billion people in around 20 countries practice open defecation, which impacts health, the environment and human dignity. You can’t imagine how dangerous it is for many women around the world to go outside their village or into a dark place and be exposed to sexual abuse and other threats.

Jan Eliasson discusses why it is vitally necessary to make concrete progress on improving hygiene and eliminating open-air defecation, which perpetuates a vicious cycle of disease and entrenched poverty. Credit: UNTV

If we meet the water and sanitation targets of MDG 7, we have immediate positive effects on 5 other MDGs – we improve maternal health, general health, education and gender equality. And we reduce extreme poverty. Economists have proven that an investment in sanitation actually brings back five times the amount invested.

One of the most important meetings on water and sanitation I have attended was the Sanitation and Water for All high-level meeting hosted at the World Bank in 2012.

In the room were around 40 Ministers of Finance and it was striking how they concluded that getting water and sanitation right is a great investment for any country. After that meeting, I think that 12 or 13 of the Ministers gave higher priority to water and sanitation because they could see the reduced outlays and costs in the health sector; they could see people going to work and not staying home sick.

UN News Centre: Building on that, what do you think can be done to translate that awareness to ordinary citizens? Sometimes things can get stranded at the ministerial level, so what can be done so that the wider world, especially Western countries, understands how important this is to reaching the MDGs?

Jan Eliasson: This requires international and national division of labour; we need to mobilize on so many levels. The United Nations can be a catalyst for action for mobilization of public opinion – like World Toilet Day – but we need to make sure the Member States give water and sanitation issues higher priority on the national and local level. I think mayors and those who head states and provinces have a very crucial role.

We also face a situation where soon 60 per cent of humanity will live in urban areas. This will put tremendous pressure on infrastructure. If demands are not met and slums are created, then there can been a great risk of spreading disease, even cholera epidemics as we’re seeing in some cases right now.

So I would say that generally, we have to mobilize international organizations, regional organizations, Governments, parliaments, civil society, the private sector, the academic and scientific community, to make sure that we bring about concrete solutions to this very important challenge.

UN News Centre: Are there any countries in the developing world that are taking the lead on this issue?

Jan Eliasson: I think there is a growing awareness about the issue, particularly on safe water. In that area there is some progress, though not enough. But on sanitation, I think there is a slower trend and that’s why we need this mobilization. While it would be unfair to point to specific countries, I know that there are those that are really moving forward on the issue. One example is Ethiopia, where I was recently.

I think that all countries realize the importance, but to translate that into action that is measurable and tangible is the challenge. Here at the UN, we generally know what the problems are. The big challenge for us is to give a good answer to the question ‘how.’ It’s the ‘how’ that we need to work harder on and to be very practical and concrete about.

UN News Centre: So what’s next for this issue? What can be done to keep up the momentum after the events around World Toilet Day?

Jan Eliasson: We have something going on right now which should be at the centre of our attention – that is the need to accelerate the Millennium Development Goals. Secretary-General Ban Ki-moon launched the 1,000 Days campaign and we have much less than 1,000 days left [to reach the deadline for the MDGs]. In this, the most lagging area is sanitation, above all, sanitation.

I also think it would be good if finance ministers and Governments looked at the situations in their own countries and examined the enormous benefits of investing in sanitation. We need to look to provide as many good solutions as possible.

One challenge is of course that we need sustainable solutions, so [for example] in a world with serious water shortages, we can’t have systems that use five or six litres of water every time someone goes to the toilet. We need to also look at the wider issues, for instance, waste management. We are destroying so may of our waterways, lakes and rivers by putting waste into them. That in turn leads to degradation of those waterways but also to diseases of horrible dimensions.

It’s an issue that is related to many other areas, but if we put a glass of water in front of us and say ‘this is what we need to achieve’ along with a toilet, which is a symbol of a life of dignity and good health, then we can make a great contribution to improving the lives of so many people around the world.

♦ Receive daily updates directly in your inbox - Subscribe here to a topic.
♦ Download the UN News app for your iOS or Android devices.
toilet 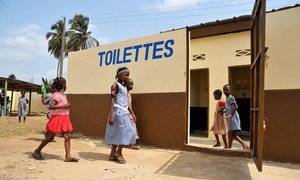