Typhoon Haiyan, which devastated the Philippines a week ago, is a wake-up call for the international community to speed up efforts to fight climate change, Secretary-General Ban Ki-moon warned today, as latest estimates put the total of those affected at nearly 13 million, including over 4 million displaced and 2.5 million in need of food aid.

“Everybody now knows that climate change is happening and approaching much faster than we might have thought,” Mr. Ban said at a joint press conference with President Dalia Grybauskaite of Lithuania in Vilnius.

“Therefore, it is imperative that Member States redouble their efforts to raise the level of ambition and there should be a strong political leadership role,” he added, noting that this is why he is going to Warsaw later today to meet with leaders attending the UN climate change conference.

“I will be meeting many world leaders and ministers to ask them to raise their political awareness and political leadership role and mobilize all necessary means, particularly financial support, for developing countries so that they will be able to mitigate and adapt to this changing situation.”

Meanwhile, efforts are continuing to reach those affected by Haiyan. The United Nations Office for the Coordination of Humanitarian Affairs (OCHA) quoted the authorities as reporting that while more debris has been cleared and public services are being restored those affected are still facing power outages and fuel shortages.

Last week, the UN and its partners launched an appeal for $301 million to provide humanitarian assistance. As of Saturday, the appeal is 26 per cent funded.

Nearly half of the health facilities in four affected regions remain closed. UN Emergency Relief Coordinator Valerie Amos has arrived in the Philippines for a follow-up visit and is expected to visit affected areas in the coming days.

The UN Children’s Fund (UNICEF) reported that at least 200,000 people in Tacloban, one of the worst hit cities, and six surrounding districts are now receiving clean water, with the first water treatment plant having come back to full operating capacity last night.

UNICEF, the Philippines armed forces and the US Agency for International Development (USAID) took part in negotiations resulting in an initial emergency fuel supply to run the plant for four days.

In the past 48 hours, UNICEF has been trucking and airlifting water and sanitation supplies to Tacloban and other affected areas to restore clean water supplies and reduce the threat of diseases caused by poor sanitation and contaminated water. 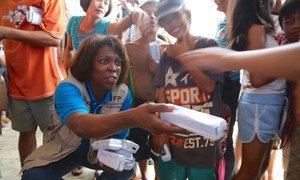 Food for more than three-quarters of a million people has been dispatched to communities hit by Typhoon Haiyan, and more is arriving every day, the head of the United Nations World Food Programme (WFP) said on Sunday as she met with survivors in Tacloban.