17 November 2013
Food for more than three-quarters of a million people has been dispatched to communities hit by Typhoon Haiyan, and more is arriving every day, the head of the United Nations World Food Programme (WFP) said on Sunday as she met with survivors in Tacloban.

Executive Director Ertharin Cousin acknowledged the strength of the local people, who are working shoulder-to-shoulder with WFP and other relief organizations to respond to the disaster.

“What I've seen in Tacloban today is the incredible resilience of the Filipino people. These people are not asking for a handout, they're asking for a hand up to rebuild their lives,” she said.

While in the storm-ravaged city, Ms. Cousin met with government officials and helped distribute high-energy biscuits to children at a local high school that has been turned into an evacuation centre following the disaster that struck last weekend.

Overall, more than 13 million people have been affected by the crisis, with some 3 million displaced. According to the UN Office for the Coordination of Humanitarian Affairs (OCHA), clean water, sanitation, food, and shelter remain the top priorities.

Last week, the UN and its partners launched an appeal for $301 million to provide humanitarian assistance. As of yesterday, the appeal is 26 per cent funded.

UN Emergency Relief Coordinator Valerie Amos has called on people and governments to give generously to the appeal. “We are in a race against time to save lives, get services up and running and lessen the suffering of the Philippines people,” she said in a statement issued on Friday.

Since the start of the crisis, family food packs with rice for more than 760,000 people, plus high-energy biscuits for 33,000 people have been dispatched to shelters in 24 municipalities on Leyte Island, as well as in Tacloban City, WFP reported.

“Some of these people have lost everything. But what they do have from WFP is access to nutritious food,” Ms. Cousin stated. “WFP has been working tirelessly with our government counterpart, the Department of Social Welfare and Development, to get food out to the affected people. Together, we are working to overcome logistical challenges and are scaling up the number of people reached every day.”

Tomorrow Ms. Cousin is scheduled to visit Roxas City on the island of Payan, located west of Leyte Island. WFP is establishing a logistics hub in Roxas, in addition to a hub on Cebu Island, and other hubs in the communities of Ormoc and Guiuan on Leyte Island.

Urgent action needed on road safety to save millions of lives, says Secretary-General 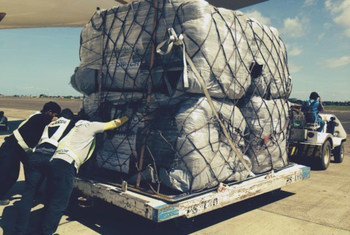 15 November 2013
With substantial progress in opening up airports and clear roads in typhoon-hit regions of the Philippines, United Nations agencies and partners are scaling up their support of Government efforts to provide relief, but a major fuel shortage is hampering access to millions of affected people.