The United Nations peacekeeping mission in Haiti today voiced its concern at recent incidents of violence in several cities and urged everyone in the country to work towards ensuring a peaceful society.

The head of the UN Stabilization Mission in Haiti (MINUSTAH), Sandra Honoré, noted the resurgence of violence and killings perpetrated in Cité Soleil, as well as violent incidents around schools in Cap Haitian.

“Such crimes are particularly disturbing as they endanger the safety of all, and the social peace that Haiti needs to move forward on the path of strengthening rule of law and socio-economic development,” she stated in a news release.

The Mission urged all Haitians, civil society and other actors, including political, religious and community leaders, to continue working for peace.

MINUSTAH also reiterated its commitment to support Haitian authorities, especially the Haitian National Police, to prevent violence and to strengthen the rule of law institutions in line with its mandate.

Last month the UN Security Council extended MINUSTAH's mandate until mid-October 2014. In doing so, it reiterated that building the capacity of the Haitian National Police remains “a most critical task” for the Mission. 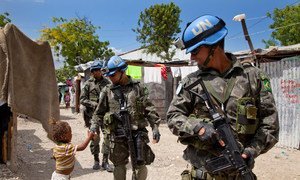 The Security Council today voted unanimously to extend the United Nations peacekeeping mission in Haiti until mid-October 2014 so it can continue contributing to stability and development in the small Caribbean nation.