UNHCR/V. Tan
Workers in the central Philippines city of Cebu unload UNHCR aid from a Boeing 747 for the victims of Super Typhoon Haiyan (local name Yolanda).

15 November 2013
With substantial progress in opening up airports and clear roads in typhoon-hit regions of the Philippines, United Nations agencies and partners are scaling up their support of Government efforts to provide relief, but a major fuel shortage is hampering access to millions of affected people.

“That logistical effort has been the principal focus of humanitarian colleagues on the ground to open up those routes and they have made very substantial progress,” John Ging, Director of the Operational Division at the UN Office for the Coordination of Humanitarian Affairs (OCHA), told journalists at UN Headquarters in New York.

“Overcoming the obstacles of the roads being destroyed, and communication networks being damaged that all the combination together is really finally coming together,” he noted, adding that the humanitarian community found itself in “a wasteland” earlier in the week.

The death toll stands at 3,600 people, according to the latest figures from the National Disaster Risk Reduction and Management Council of the Philippines, Mr. Ging said. That figure is expected to rise given the quickly changing context on the ground and the numbers still missing.

During the briefing, Mr. Ging apologized for a discrepancy in the reported death toll which OCHA had said on Thursday was 4,460. That figure was based on estimates and not actual confirmed deaths.

Overall, more than 13 million people have been affected by the crisis. At least 287,000 homes have been destroyed displacing some 1.9 million people who are taking refuge at over 1,100 evacuation centres across the country, he noted.

Fresh and clean water, sanitation, food, and shelter remain the top priorities. The Government, meanwhile, is focusing on regaining control of law and order after reports of violent attacks and looting.

“In the affected areas, we are very concerned about those who are most vulnerable, particularly women and children,” Mr. Ging said.

Also speaking to journalists, Ted Chaiban, Director of Emergency Programmes at the UN Children's Fund (UNICEF), said some five million children are believed to be affected by the Typhoon Haiyan.

“It is clear that much more needs to be done,” Mr. Chaiban said, “but we’re starting to see a turning of a corner.”

Despite significant risks that remain, he said it is important to start thinking of recovery and reconstruction so that children in Tacloban and other affected areas can be reunited with their families, return to schools and a sense of normalcy.

Of the requested $301 million flash appeal launched on Tuesday, already $72 million has been received, Mr. Ging said, with an additional $153 million donated and a separate $104 million registered in pledges but not yet assigned.

In Tacloban, partial water access has been restored to 200,000 people, the equivalent of 20 per cent of its capacity, said Mr. Chaiban, and a priority is to sustain and increase the flow.

A shortage of fuel remains a concern, with only enough in Tacloban to keep the water on for two days.

Meanwhile, the UN World Food Programme (WFP) spokesperson in Geneva, Elisabeth Byrs, said that truck loans of relief supplies are stuck at Tacloban airport and other service centres for lack of fuel.

In addition, there is very little electricity and telecommunication outside of major cities, but Mr. Chaiban noted he was able to speak with a colleague in Tacloban this morning – a sign that mobile services have been restored.

“He got from the airport to town in a half-hour, whereas two days ago it was taking us an hour and a half, so clearly things are improving in terms of getting more people on the ground,” Mr. Chaiban said.

The eased access and additional air assets, including helicopters donated by international military partners, is allowing more aid to come in by air.

At least three airlifts have already arrived in Cebu and Tacloban, the UN Refugee Agency (UNHCR) said, with an additional aid flight on its way “shortly.”

Meanwhile, mobile health clinics are being set up in both towns. According to UN World Health Organization (WHO) spokesperson Gregory Hartl there are over 20 health teams in various stages of being deployed throughout the region.

Of major concern and an immediate life-saving health need was injury management, he noted, particularly among people who have not yet received medical aid.

The UN agency is also concerned about a lack of access to safe water. A major measles vaccination is to be undertaken in the next week. 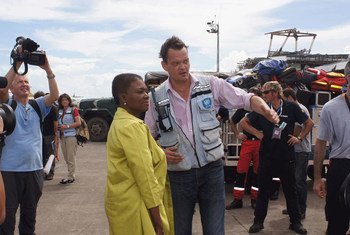 14 November 2013
The top United Nations humanitarian official today called for a sustained and collective response from the international community to help those affected by Typhoon Haiyan, and added that despite logistical challenges, aid is increasingly reaching those in need.