15 November 2013
The United Nations refugee agency today said it is deeply concerned over reports of some European Union (EU) countries denying entry or forcibly returning asylum-seekers, including people who fled the Syrian conflict.

“If practices to prevent asylum-seekers from accessing territory and procedures are taking place, UNHCR calls on States to cease them immediately,” the spokesperson for the Office of the UN High Commissioner for Refugees (UNHCR), Adrian Edwards, told reporters in Geneva.

“Push-backs and prevention of entry can put asylum-seekers at further risk and expose them to additional trauma.” UNHCR said it is currently investigating reports of these practices in Bulgaria, Cyprus and Greece.

In Bulgaria, media reports said authorities at the border had turned back 100 migrants over the weekend and deployed some 1,200 police officers to the border region. “Introducing barriers, like fences or other deterrents, might lead people to undertake more dangerous crossings and further place refugees at the mercy of smugglers,” Mr. Edwards said.

Similar activities were reported in Greece, where UNHCR asked authorities to investigate the fate of 150 Syrian refugees, including many families with children, who had reportedly been denied entry in Evros on 12 November. Villagers said the group was detained and transported in police vehicles to an unknown location. Their current whereabouts remain unknown to UNHCR.

In Cyprus, UNHCR received reports of Syrians arriving by boat in the northern part of the country and being returned to Turkey following a brief detention. In the southern part of the country, Syrians were increasingly facing difficulties with reception and assistance, and as of the end of September, there had been fewer than 400 asylum applications in Cyprus.

“UNHCR is calling for a global moratorium on any return of Syrians to neighbouring countries,” Mr. Edwards said. “This would represent a concrete gesture of solidarity with these countries that currently host over 2.2 million Syrian refugees.”

Turkey is currently hosting the largest number of Syrians in Europe, with over 500,000 registered refugees.

Mr. Edwards noted that returning Syrian refugees to Turkey or other neighbouring countries only adds to the challenges faced by these governments to assist refugees. EU states with external borders should not shoulder the refugee influx alone either, he said calling on the EU to demonstrate openness to genuine burden-sharing outside the existing mechanisms.

UNHCR said it welcomed the discretion exercised by some EU countries not to return all those requesting international protection to their first point of entry in the EU, and was appealing to others to follow suit, in an effort to demonstrate a measure of solidarity with these EU border countries.

Meanwhile, spokesperson for the UN Children’s Fund (UNICEF), Marixie Mercado, said that one of the largest deliveries of humanitarian aid had reached previously inaccessible parts of the Homs Governorate in Syria on 8 November. 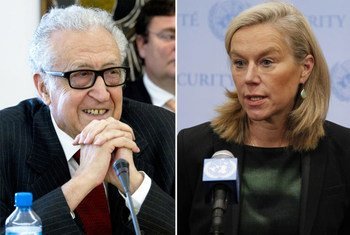 5 November 2013
International efforts to bring about a peaceful solution to the crisis in Syria continue apace, with two United Nations officials reporting today on their work towards convening a political conference that brings all sides in the conflict to the negotiating table, and overseeing the destruction of the country's chemical weapons stockpiles.