15 November 2013
The recent racist attacks in France against Guyanese-born Minister of Justice Christiane Taubira are unacceptable, the United Nations human rights office said today, warning that this is another sign of rising discrimination in many European nations.

“This utterly unacceptable abuse of a prominent politician, on the basis of her colour, is a stark manifestation of the rising racism, xenophobia and intolerance aimed at members of ethnic and religious minorities, as well as migrants, in many European countries,” the spokesperson for the UN Office of the High Commissioner for Human Rights (OCHCR), Rupert Colville, told reporters in Geneva.

Last month, a candidate for the National Front party likened Ms. Taubira to a monkey in a television documentary that was broadcast on 17 October. A week later, several demonstrators in the town of Angers, including children, who were protesting against gay marriage, waved banana peels at Ms. Taubira and shouted “Monkey, eat your banana!”

This week, the French magazine ‘Minute’ published a cover showing Ms. Taubira with the headline “Cunning as a monkey, Taubira gets the banana back.”

“The underlying racist intent of this play on words could not be more clear, despite the magazine’s protestations that they were just using two common French expressions, the second of which is used colloquially to describe someone who is very happy,” Mr. Colville said.

“We welcome the prompt and unequivocal condemnation of the racist attack on Ms. Taubira by the Government and many other politicians and commentators in France.”

Mr. Colville stressed that political leaders have a responsibility to lead the way in fighting racism, xenophobia and gender discrimination. He also reiterated the recommendations made by UN human rights mechanisms, urging France to step up its efforts and use all possible means to counter the tide of racism and xenophobia.

Back in July, OHCHR expressed concern about similar racist attacks against Italian Minister of Integration Cécile Kyenge, including remarks by Deputy Senate Speaker Roberto Calderoli comparing her to an orangutan.

“We strongly condemn these blatantly racist comments and acts, which are utterly unacceptable whether aimed at politicians, footballers or, less visibly on a daily basis, at ordinary citizens,” Mr. Colville added. 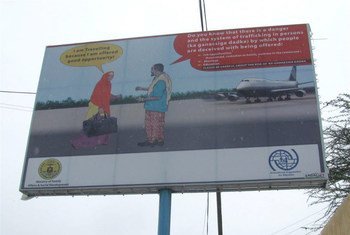 20 September 2013
Warning that human trafficking in Italy, particularly for the sexual exploitation of women and girls, is growing, a United Nations human rights expert today called on the Government to boost its efforts to combat the scourge.