13 November 2013
Food systems will need to change significantly to tackle severe nutrition problems that currently afflict more than half of the world’s population, experts told a United Nations meeting in Rome today.

“It is clear that the ways in which food is managed today are failing to result in sufficient improvements in nutrition. The most shocking fact is that over 840 million people still suffer from hunger today, despite the fact that the world already produces enough food for all, and wastes one-third of it,” said the Director-General of the Food and Agriculture Organizations (FAO), José Graziano da Silva.

“The total amount of food produced but not consumed would be enough to feed an additional two billion. The truth of the matter is that, today, consumers are not receiving the right signals from current policies about how to eat healthily. That is what we need to address.”

The three-day meeting, organized by FAO and the World Health Organization (WHO), aims to boost coordination of international efforts to address the agricultural, economic, health, and food systems and other factors that negatively influence what and how people eat, especially in developing countries.

The meeting is a preparatory event designed to lay the groundwork for the Second International Conference on Nutrition (ICN2), scheduled to take place in November 2014.

Hans Troedsson, Executive Director of the WHO Director-General’s Office, also called for a rethinking of the way in which the food system is managed, saying diet was a key factor in tackling the global burden of disease.

“If we, in the past, were mainly challenged by malnutrition in children, we are today facing an epidemic of poor diets and low physical activity, leading to high blood pressure, cardiovascular diseases, diabetes and overweight,” he said.

“The nutrition and health threats have actually expanded and worsened and this will not go away by itself. We need to address it urgently now and in the future,” he added. “The health sector and the food sector need to work together.” 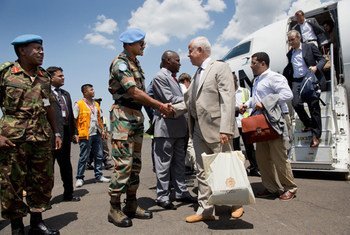 7 October 2013
As part of an official visit to countries in Africa’s Great Lakes region, the 15 members of the United Nations Security Council have over the past few days met with various heads of State to discuss the implementation of the broad based peace accord agreed earlier this year.