The United Nations today appealed for nearly a third of a billion dollars to provide humanitarian assistance to typhoon hit regions of the Philippines where aid workers are labouring around the clock to get in urgently needed survival supplies, such as food, clean water, shelter and basic medicines.

UN Emergency Relief Coordinator Valerie Amos launched the $301 million flash appeal from Manila, the capital, where she is surveying the damage by Typhoon Haiyan which ripped through nine regions in south-east Asia over the weekend.

“The appeal of $301 million covers an initial period of six months,” said the UN Office for the Coordination of Humanitarian Affairs (OCHA) spokesperson, Jens Laerke, in Geneva. “The humanitarian community continues to scale up its operations to provide lifesaving aid. Many areas do remain inaccessible, we are reaching into them little by little.”

More than 11 million people have been affected by what the UN World Meteorological Organization (WMO) has called the strongest tropical cyclone so far this year and one of the most intense on record.

At least 670,000 people have been displaced, the majority of them in evacuation centres, the rest in host communities or makeshift shelters, according to OCHA.

“Water supply and power are cut. Much of the food stocks and other goods are destroyed. Many health facilities are not functioning and medical supplies [are] quickly being exhausted,” the UN humanitarian relief arm said in its latest action plan update.

The UN World Health Organization (WHO) is working with the Government to set up field hospitals, as personnel and medical supplies are arriving in the country.

The health needs during the disaster are “significant”, the agency said, made worse by crowded living conditions and contaminated drinking water which can lead to the spread of infectious diseases.

“With another tropical storm expected to hit the Philippines later this week, the need for safe water and sanitation facilities is critical,” WHO said. 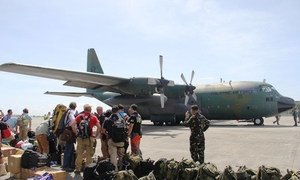