UNFPA
A mother at the Manakara clinic, in south eastern Madagascar, brings her child for pneumonia check-up.

12 November 2013
The United Nations and its partners are marking World Pneumonia Day today by highlighting essential actions that can help end child deaths from the single biggest killer of children under the age of five around the world.

Pneumonia claims the lives of more than one million girls and boys every year, even though deaths from the disease are preventable, according to a joint news release issued by the World Health Organization (WHO), the UN Children’s Fund (UNICEF) and the public-private partnership known as the GAVI Alliance.

“Every 30 seconds, a child younger than five dies of pneumonia. This is a great shame as we know what it takes to prevent children from dying of this illness,” says Mickey Chopra, Chief of Health, UNICEF. “Tackling pneumonia doesn’t necessarily need complicated solutions.”

Many factors contribute to pneumonia, and no single intervention can effectively prevent, treat and control it, the partners stated, while noting that five simple but effective interventions, if implemented properly, will help reduce the burden of the disease that is responsible for almost one-fifth of all child deaths around the world.

Recognizing the need for integrated efforts to address child mortality, WHO and UNICEF released in April the Integrated Global Action Plan for the Prevention and Control of Pneumonia and Diarrhoea.

The Plan presents an innovative framework bringing together prevention, protection and control of both pneumonia and diarrhoea – two of the world’s leading killers of children under five – to make more efficient and effective use of scarce health resources.

To mark this year’s Day, whose theme is “Innovate to End Child Pneumonia,” Mauritania and Papua New Guinea are introducing the pneumococcal vaccine, which protects against one of the leading causes of pneumonia. With support from the GAVI Alliance, more than 50 countries will introduce this vaccine by 2015.

“The GAVI Alliance is helping to accelerate the fight against pneumonia by increasing access to pneumococcal vaccines, thanks to GAVI’s innovative Advance Market Commitment (AMC), but also to the 5-in-1 pentavalent vaccine which protects against Haemophilus influenzae type b, another major cause of pneumonia,” says Seth Berkley, CEO of the GAVI Alliance. 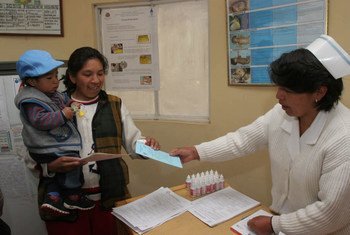 12 April 2013
The United Nations today launched a global plan to combat two of the leading killers of children under five, potentially saving two million youngsters each year who would otherwise die from pneumonia and diarrhoea in low- and middle-income countries.