“This is an important step forward to start with, but much more needs to be done,” said the Director-General of the International Atomic Energy Agency (IAEA), Yukiya Amano, at a news conference after the signing.

“Under the Framework, Iran and the IAEA will cooperate further with respect to verification activities to be undertaken by the IAEA to resolve all present and past issues.”

Iran’s cooperation will include providing the IAEA with timely information about its nuclear facilities and in regard to the implementation of transparency measures. For its part, the IAEA agreed to continue to take into account Iran’s security concerns, including through the use of managed access and the protection of confidential information.

The Joint Statement on a Framework for Cooperation, signed by Mr. Amano and Iranian vice-president Ali Akbar Salehi, includes an annex that lists practical measures to be taken as a first step by Iran within three months.

Mr. Amano said that outstanding issues that are not contained in the annex will be addressed in the subsequent steps under the Framework for Cooperation.

“The IAEA is firmly committed to resolving all outstanding issues through dialogue and cooperation,” he added. 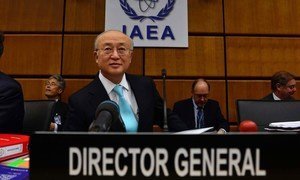 Discussions between the United Nations and Iran on clarifying outstanding issues related to the country’s nuclear programme are “going around in circles,” the head of the International Atomic Energy Agency (IAEA) reported today