The Security Council has expressed outrage at a deadly bomb attack in Mogadishu, which caused numerous deaths and injuries, and reiterated its determination to combat all forms of terrorism.

According to media reports, a car loaded with explosives blew up outside one of Mogadishu's most expensive hotels Friday evening, killing some 11 people and wounding many more.

Members of the militant group Al-Shabaab have claimed responsibility for the blast.

In a statement, members of the Council underlined that terrorist acts in the country “will not lessen the Council's resolve to support Somalia's efforts towards peace, stability and reconciliation.”

The Council also reiterated its willingness to take measures against those whose behaviour threatens the peace or security of the country.

Somalia has been torn asunder by factional fighting since 1991 but has recently made progress towards stability. In 2011, Al-Shabaab insurgents retreated from Mogadishu and last year, new Government institutions emerged, as the country ended a transitional phase toward setting up a permanent, democratically-elected Government.

“The members of the Security Council extend their condolences to the victims and their families, as well as to the people and Government of Somalia,” the statement said, adding that the Council remains committed to international and Somali efforts to remove the threat posed by Al-Shabaab to Somalia and the region. 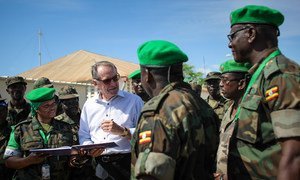 Without adequate security, the efforts of the Somali Government and people, and those of their partners, could be in vain, the Deputy Secretary-General of the United Nations said today, calling on the Security Council to support a temporary boost to national and international forces aiming to maintain basic security in the Horn of Africa nation.