IRIN/Jason Gutierrez
An average of 20 typhoons a year strike the Philippines.

9 November 2013
The United Nations is ramping up its relief efforts to respond to the devastation caused by the super typhoon Haiyan in the Philippines, following Government reports of some 1,200 casualties and an estimated 4.6 million people affected.

“The United Nations agencies in the Philippines, with their humanitarian partners, are supporting the Government and other responders in their efforts to assess the situation and respond rapidly with vital supplies, through the coordination system led by the local authorities,” said Emergency Relief Coordinator Valerie Amos.

This morning, the UN Disaster Coordination Team (UNDAC) arrived in the city of Tacloban, one of the most affected areas, and reported scenes of total devastation, with all roads from the airport to the town blocked. The UN Children's Fund (UNICEF) and the World Food Programme (WFP) have also mobilized their in-country teams to reach those affected.

The Philippines Red Cross said it has received reports of 1,200 deaths in two areas hit by the typhoon, a drastic increase from the three reported yesterday.

“Sadly, it is likely that this figure will rise,” Ms. Amos said. "The Government estimates that some 4.3 million people are affected, across 36 provinces, and initial assessments show that thousands of homes have been destroyed, roads are impassable and people need food, water, shelter and power.”

According to UNICEF, up to 1.7 million children could be affected by Haiyan. The agency has already mobilized its staff to deliver pre-positioned emergency supplies, and is flying in some 60 metric tonnes of additional supplies from Copenhagen, including medical and shelter equipment. They are expected to arrive within the next three days.

In addition, the World Food Programme (WFP) has mobilized $2 million for the response, and will be appealing for more funds as the needs become clearer. As a preliminary measure, 40 metric tonnes of high-energy biscuits will be flown in from Dubai in the coming days. These are often provided in the early days of a crisis as they are light to transport and do not need cooking. WFP is also looking at other food commodities to stabilize the nutrition situation.

“The devastation we saw in Tacloban today was shocking,” said WFP Representative and Country Director Praveen Agrawal. “People have lost their homes and livelihoods, and the damage to infrastructure is substantial."

In a statement issued by his spokesperson, Secretary-General Ban Ki-moon said he was deeply saddened by the extensive loss of life and the serious damage to the infrastructure of the country.

“The Secretary-General offers his sincere condolences to the people and Government of the Philippines, particularly to those who have lost family members, their homes or have been otherwise affected by this disaster,” the statement said.

Haiyan, known locally as Yolanda, is one of the strongest storms ever recorded, hitting landfall with sustained winds of 295 kilometres per hour (kph), placing it above the 252 (kph) threshold for a Category 5 hurricane, the highest category on the Saffir-Simpson hurricane wind scale. The typhoon is expected to hit Viet Nam later today. 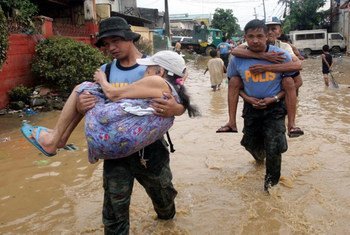 8 November 2013
The United Nations and its partners are supporting the Government of the Philippines in assessing the damage caused by super typhoon Haiyan, which made landfall this morning in Guiuan on Samar Island and is currently making its way across the country.