UNHCR/Alixandra Fazzina
People waiting to board a boat to take them across the Gulf of Aden.

8 November 2013
More than 62,000 people arrived in Yemen from the Horn of Africa this year, the United Nations refugee agency said today, calling for increased cooperation among countries to ensure protection for asylum seekers who risk their lives on this deadly route.

“The crossing from the Horn of Africa to Yemen is one of several deadly sea routes worldwide that UNHCR watches closely,” spokesperson for the Office of the UN High Commissioner for Refugees (UNHCR), Adrian Edwards, told reporters in Geneva.

“Hundreds of people, including Syrian refugees, have died in recent months crossing the Mediterranean to Europe. In Southeast Asia, just last weekend, dozens of people were reported missing after their boat capsized off the coast of Myanmar in the Bay of Bengal.”

Yemen has seen six successive years of high arrivals by sea. Since 2006, when UNHCR started collecting data, more than half a million asylum seekers, refugees and migrants have travelled by sea to Yemen. Most are Ethiopians, citing the difficult economic situation at home and often hoping to travel through Yemen to the Gulf States and beyond.

Somalis arriving in Yemen are automatically recognized as refugees by the authorities, while UNHCR has helped determine the refugee status of other asylum seekers, including from Ethiopia, Eritrea, and other countries.

UNHCR is encouraging cooperation among countries affected by mixed migration, and is supporting the Yemeni Government to organize a conference next week on asylum and migration together with the International Organization for Migration.

The three-day conference will take place in Sana’a, with participants from Governments from the Horn of Africa, Gulf States, donor countries, non-governmental organizations (NGOs), and institutions such as the Regional Mixed Migration Secretariat.

“The aim of the Yemen conference is to establish a regional plan to help manage mixed migration between the Horn of Africa and the Arabian Peninsula,” Mr. Edwards said.

The objectives of the plan include, saving lives, ensuring better protection systems for asylum seekers and refugees, strengthening law enforcement against smuggling and trafficking networks, increasing funding for assisted-voluntary-returns programmes, and raising awareness of the dangers of irregular migration. 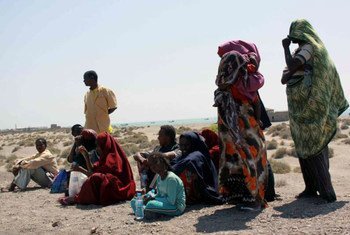 6 August 2013
A record number of refugees and migrants arrived in Yemen during the first half of this year, the United Nations reported today, while also warning that it is increasingly dangerous for people to make the trip by boat from the Horn of Africa, and once in the country, they face many challenges such as sexual abuse and exploitation.