IRIN/Jason Gutierrez
An average of 20 typhoons a year strike the Philippines.
8 November 2013

The United Nations and its partners are supporting the Government of the Philippines in assessing the damage caused by super typhoon Haiyan, which made landfall this morning in Guiuan on Samar Island and is currently making its way across the country.

“We are working closely in support of Government and local authorities to assess the life-saving needs of the people affected by this typhoon,” said Julie Hall, acting Resident and Humanitarian Coordinator in the Philippines.

The super typhoon, known locally as Yolanda, has ripped roofs off housing, uprooted trees and affected businesses, but the full extent of the damage will not be known until the storm has passed.

According to media reports, it is one of the strongest storms ever recorded, with sustained winds of 295 kilometres per hour (kph), placing it above the 252 kph threshold for a Category 5 hurricane, the highest category on the Saffir-Simpson hurricane wind scale. Three people have reportedly died, and seven others have been injured.

Haiyan is expected to travel over eastern, central and western Visayas, Bicol and Southern Tagalog, which have a combined population of 29.4 million people. The World Meteorological Organization (WMO) described the typhoon as “violent” but said it is expected to weaken slightly on a trajectory towards Viet Nam. 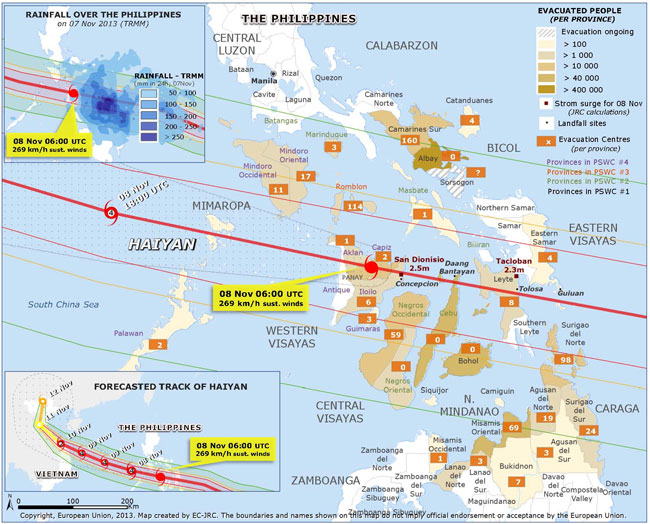 The Government has taken preventative steps to save lives by moving people from coastal and low-lying areas known to be prone to flash flooding and landslides. The UN Humanitarian Country Team and partners have complemented these efforts by pre-positioning stocks to respond to life-saving needs of affected people.

“The Humanitarian Country Team and partners are fully prepared to support and assist the Government in response to this latest typhoon,” said Ms. Hall. “We will continue to support their efforts as we wait to see exactly the extent of the damage caused by Typhoon Haiyan.”

The World Food Programme (WFP) estimates that 2.5 million people will require immediate assistance in the aftermath of the typhoon, and said it would participate in the Government-led assessment.

The United Nations and humanitarian partners in the Philippines appealed today for $46.8 million to meet the acute needs of the victims of the Bohol earthquake which is believed to have affected more than 3 million people.