The Colombian Government and the Revolutionary Armed Forces of Colombia (FARC) released a joint statement announcing an agreement covering the latter’s participation in national politics if talks in Havana reach a final deal to end their decades-old armed conflict, according to media reports. The agreement also calls for the FARC to disarm and form a political movement.

In a statement issued by his spokesperson, Mr. Ban underscored the importance of guarantees and mechanisms to “ensure citizen participation in achieving lasting peace grounded in democratic principles and respect for human rights.”

He also praised the commitment of the parties to implement the agreement with a gender perspective, ensuring the political participation of women.

Political participation is the second item of the General Agreement for the End of the Conflict and Building a Stable and Lasting Peace.

Some 600,000 people have died since the conflict between the country’s authorities and the FARC began in the 1960s. Recently, the two sides have been engaged in negotiations in the Cuban capital on various issues in an effort to put an end to the long-running conflict.

Mr. Ban welcomed the announcement that talks will continue in Havana and wished both delegations further success in reaching agreement on the remaining issues.

In a separate statement, UN Humanitarian Coordinator Fabrizio Hochschild, emphasized the importance of continued dialogue to achieve an end to the armed conflict and reiterated the UN’s readiness to continue supporting the peace process. 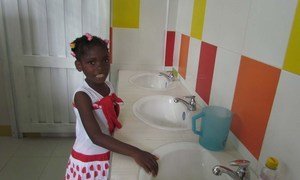 Calling on the international community to help Colombia build on the “huge progress” made in recent years, a senior United Nations official today urged providing continued support to ensure the Latin American country fully recovers from decades of conflict.