7 November 2013
Improved supplies and a recovery in global inventories of cereals has led to less price volatility than in recent years, the United Nations Food and Agriculture Organization (FAO) said today, adding that food prices over the past month rose slightly, driven by higher sugar prices.

“The prices for most basic food commodities have declined over the past few months. This relates to production increases and the expectation that in the current season, we will have more abundant supplies, more export availabilities and higher stocks,” David Hallam, Director of FAO’s Trade and Markets Division, said in a press release.

The sharp increase in this year’s cereal production mostly stems from a recovery of maize crops in the United States and record wheat harvests in the former Soviet republics that are now members of the Commonwealth of Independent States (CIS), according to the Rome-based FAO.

Global rice production in 2013 is expected to grow only modestly, the agency added, as it released its latest Food Outlook report.

FAO expects global cereal stocks to increase by 13 per cent, to 564 million tonnes, by the end of 2014, with coarse grains alone up by 30 per cent, mostly in the US. Wheat and rice stocks are also projected to rise, by 7 per cent and 3 per cent respectively.

The Food Outlook states that in 2013, the world food import bill is set to decline by 3 per cent to $1.15 trillion, with import costs of cereals, sugar, vegetable oils and tropical beverages falling, but dairy, meat and fish remaining firm.

Meanwhile, the FAO Food Price Index, also published in this report, rose slightly in October, averaging 205.8 points. This was 2.7 points, or 1.3 per cent above September, but still 11 points, or 5.3 percent below its October 2012 value.

The slight increase was largely driven by a surge in sugar prices, although prices of the other commodity groups were also up, the agency noted.

The Index, which is a measure of the monthly change in international prices of five major food commodity groups, has undergone some changes in the way it is calculated, FAO said, while adding that this new approach did not significantly alter the values in the series.

As for other commodities, FAO forecasts that world cassava output is expected to increase for the fifth consecutive year and to reach 256 million tonnes in 2013. This is being fuelled by rising demand for food in the African continent and increasing industrial applications of cassava in East and South-east Asia, especially for ethanol and starch.

World sugar production is forecast to increase only slightly in 2013/14, the agency said, noting that the rise is likely to be limited in Brazil, the world’s largest sugar producer and exporter, where unfavourable weather conditions have hampered harvesting operations. Sugar consumption worldwide is set to grow by about 2 per cent in 2013/14.

Meat and dairy production is expected to grow in 2013, by 1.4 per cent and 1.9 per cent respectively. Meat prices have remained at “historically high” levels since the beginning of 2011, with no sign of overall price decreases, said FAO. 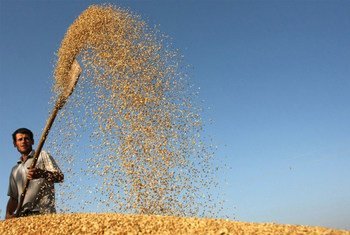 3 October 2013
The global supply of cereal this year will surpass the 2012 level by nearly eight per cent, the United Nations food agency reported today, as it also announced a drop in global food prices for the fifth consecutive month.