Partnerships are vital if countries want to reduce poverty and advance economic and social progress, United Nations officials stressed today, as they considered ways to address challenges and accelerate the achievement of the global anti-poverty targets known as the Millennium Development Goals (MDGs).

Agreed upon by world leaders at a UN summit in 2000, the MDGs set specific targets – to be achieved by 2015 – on poverty alleviation, education, gender equality, child and maternal health, environmental stability, HIV/AIDS and malaria reduction, and a global partnership for development.

As the deadline nears, UN Member States are also working on a blueprint for a post-2015 development agenda that will meet the needs of people and the planet.

“Partnerships are essential, not only for accelerating the achievement of the MDGs, but also in the perspective of successfully framing a post-2015 development agenda,” Ambassador Néstor Osorio of Colombia, President of the UN Economic and Social Council (ECOSOC), said at a special joint meeting held with the General Assembly committee dealing with economic and financial matters, also known as the Second Committee.

“The collaboration of Governments with private sector, civil society and other key stakeholders is vital for achieving economic and social progress. Today’s challenges require all of us to work closely together to ensure synergies and enhance the impact of our work.”

He said that the process of defining solutions to address sustainable development challenges provides an excellent opportunity to engage the private sector with the UN’s work.

“As Governments are given tremendous responsibilities in implementing national policies to achieve the MDGs, support from the private sector has become even more crucial. Indeed, it is clear that both governments and the international community can benefit greatly from the expertise, resources and capacities provided by the private sector.”

ECOSOC places great emphasis on partnerships for supporting the international development agenda, Mr. Osorio added. Since 2008, it has convened an annual Partnerships Forum that has brought together senior private sector and foundation representatives to discuss with governments ways in which partnerships could be strengthened in support of the MDGs.

Ambassador Abdou Salam Diallo of Senegal, Chair of the Second Committee, said the world is today at a critical juncture, and is confronted with serious challenges.

“Despite progress made in fighting poverty, hunger and diseases, more than a billion people still live in extreme poverty and hunger. Inequalities continue to persist, local and global environmental threats, including climate change and disasters are reaching unprecedented levels of danger, and conflict and insecurity are still widespread in many parts of the world,” he noted.

“Fortunately, however, the world also has exceptional opportunities, including tremendous human potential, financial resources, know-how and new innovative tools for social mobilization, to take on and solve these great challenges,” said Mr. Diallo.

“The reality is that many of the MDGs are not being met, so it is critical that national Governments and development partners redouble efforts through to the end of 2015 to achieve all of these goals. Only if we do everything within our power to achieve them wherever possible can we credibly transition to a bold post-2015 development agenda.” 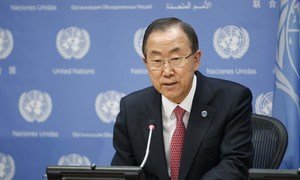