“Premarital sex, adultery, failing to prove rape, dressing ‘indecently’ or ‘immorally’, being found in the company of a man, or committing acts that are deemed incompatible with chastity – these are some of the offences for which women have been chastised with flogging in various parts of the world,” said the Special Rapporteur on violence against women, its causes and consequences, Rashida Manjoo. “This needs to stop.”

On Monday, Amira Osman Hamed, a 35-year-old Sudanese civil engineer and women’s rights activist was charged with dressing indecently or immorally for refusing to cover her hair with a headscarf. If found guilty, she could be sentenced to corporal punishment of up to 40 lashes.

Following Monday’s hearing, Ms. Osman Hamed remains in legal limbo while the prosecution decides if additional hearings will take place or if the case will be dismissed.

“Given continued discrimination and inequalities faced by women, including inferior roles attributed to them by patriarchal and traditional attitudes, and power imbalances in their relations with men, maintaining flogging as a form of punishment, even when it applies to both women and men, means in practice that women disproportionally face this cruel punishment, in violation of their human rights to dignity, privacy and equality,” said Frances Raday, the chairperson of the Working Group on the issue of discrimination against women in law and in practice.

The experts called for the immediate release of Ms. Osman Hamed and for the Government of Sudan to review its legislation related to flogging.

“Corporal punishment of women and girls is usually linked to the control and limitation of their freedom of movement, freedom of association, as well as their personal and sexual choices. Punishment usually has a collective dimension, and is public in character, as the visibility of the issue also serves a social objective, namely, influencing the conduct of other women,” the experts said.

“We call on States to abolish all forms of judicial and administrative corporal punishment, and to act with due diligence to prevent, respond to, protect against, and provide redress for all forms of gender-based violence.” 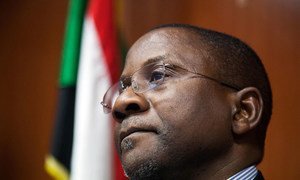 Sudan: UN expert calls on Government to either charge or release hundreds of detainees

Voicing “deep concern” at the large number of Sudanese detained since mass protests erupted 10 days ago over fuel subsidy cuts, a United nations special expert today called on the Government to either charge them or release them immediately, while also ending heavy media censorship.