IRIN/Steve Sandford
Two Kachin soldiers stand guard opposite a Chinese dam in northern Kachin state, where more than 85,000 people have been displaced by conflict.
5 November 2013

Following an agreement in October between the Kachin Independence Organization and the Myanmar Government, a dialogue was held on 4 and 5 November between the Government and Ethnic Armed Groups in Myitkyina, the capital city of Kachin state.

“The meeting in Myitkyina was the first meeting between the combined Ethnic Armed Organizations and the Government in decades and as such represents a significant move forward in the national reconciliation process,” said Vijay Nambiar, the Secretary-General’s Special Adviser on Myanmar, who participated as observer in the talks.

“The fact that such a meeting could take place within the country testifies to the distance that the Government and Ethnic Armed Groups have traversed since the beginning of the reform process in Myanmar,” he added in a statement issued in Yangon.

Mr. Nambiar said he was encouraged by the constructive spirit that characterized the deliberations and by the fact that so many groups have been able to come together on a common platform for their dialogue with the Government. “The commitment shown by all parties in bringing peace to all corners of the country was particularly commendable.”

The two-day meeting that concluded today follows a meeting last month in Kachin between Ethnic Armed Groups during which a Nationwide Ceasefire Coordination Team was established to represent the Ethnic Armed Groups in a dialogue to reach a nationwide ceasefire agreement.

In January, the Government announced a unilateral ceasefire following a three-week offensive against ethnic Kachin rebels. Then in May, the Government and the Kachin Independence Organization (KIO) concluded a seven-point agreement by which they agreed to, among others, establish a political dialogue and hold discussions on resettling more than 75,000 people who have been displaced since fighting began almost two years ago.

“The Special Adviser believes that a peaceful solution to the conflicts in Myanmar is a critical priority for the future of the country and its people,” said today’s statement.

“The United Nations will continue to assist and support the people of Myanmar as the country continues on its path towards peace and democracy.” 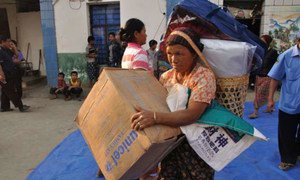 Secretary-General Ban Ki-moon today welcomed the agreement reached between the Government of Myanmar and the Kachin Independence Organization (KIO), calling it a first step towards reconciliation in the country.