5 November 2013
The United Nations special envoy for Africa’s Great Lakes region today joined other senior diplomatic officials in welcoming the announcement by the M23 rebel group that it is ending its bloody insurgency against the Government of the Democratic Republic of the Congo (DRC), which for nearly two years has exacerbated humanitarian strife in the country’s restive east.

Welcoming the announcement in a statement issued from the Congolese capital, Kinshasa, Mary Robinson, Special Envoy of the Secretary-General to the Great Lakes Region, and Martin Kobler, Special Representative and head of the UN peacekeeping mission in the DRC, were joined by a host of other diplomats, including Boubacar Diarra, African Union Special Representative for the Great Lakes, Russell Feingold, United States Special Envoy for the region and the DRC, and Koen Vervaeke, European Union Senior Coordinator to the region.

The envoys also welcomed the commitment of the Congolese Government to end combat and complete steps agreed to as part of the Kampala Dialogue. The envoys commended Ugandan President Yoweri Museveni and his Defense Minister, Crispus Kiyonga, for their “patient and determined leadership” in facilitating the Dialogue.

“The Envoys urge both parties to conclude the political process by signing a principled agreement that ensures the timely disarmament and demobilization of the M23 and accountability for perpetrators of war crimes and crimes against humanity,” the statement said, adding that the officials also welcomed the reestablishment of State authority by the Congolese Government in areas previously held by the M23.

While the envoys noted that the end of the M23 rebellion represents an important step in ensuring sustainable peace in eastern DRC and the Great Lakes region, they stressed that “this is only one step towards addressing the persistent conflict and instability, and to ensure an end to all illegitimate armed actors in the DRC, including the FDLR (Democratic Forces for the Liberation of Rwanda).”

The envoys went on to urge all signatories of the Peace, Security and Cooperation Framework for the Great Lakes and the DRC to recommit to ensuring the implementation of the accord, including by advancing a political dialogue between key countries in the region.

Today’s announcement comes in the wake of fresh clashes between Government troops (FARDC) and M23 fighters in and around flashpoint towns in the eastern DRC. The UN mission (MONUSCO), which has been supporting the Government’s operations, has been on “high alert” since the violence began to escalate; its helicopters were fired upon twice during the past two weeks and, since late September, three peacekeepers have been killed in the line of duty. The Kampala talks stalled as the fighting intensified.

The M23 – composed of soldiers who mutinied from the DRC national army in April – along with other armed groups, has clashed repeatedly with the FARDC. In the past year, the fighting has displaced more than 100,000 people, exacerbating an ongoing humanitarian crisis in the region which includes 2.6 million internally displaced persons and 6.4 million in need of food and emergency aid. Earlier today, the UN refugee agency reported some 10,000 people had been forced to flee to Uganda after fresh fighting in the region.

At various times, UN officials have also deplored the activities of other armed groups in the region, including Mayi Mayi, the FDLR, the National Army for the Liberation of Uganda (NALU) and the Allied Democratic Forces (ADF). 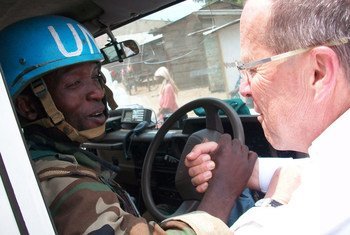 4 November 2013
A team of special envoys led by the United Nations today noted the announced cessation of hostilities between the M23 rebel group and the Government of the Democratic Republic of the Congo (DRC).