In his presentation to the General Assembly, the Director General of the International Atomic Energy Agency (IAEA) recalled that it is now nearly 60 years since United States President Dwight Eisenhower gave his historic ‘Atoms for Peace’ speech to the UN body and called for the establishment of an international atomic energy agency to put nuclear material to use to “serve the peaceful pursuits of mankind.” Four years later, in 1957, the IAEA began work in Vienna.

“Since then, the Agency has worked hard to bring the benefits of peaceful nuclear technology to all parts of the globe and to prevent the spread of nuclear weapons,” said Yukiya Amano.

“The world has changed enormously in that time. But the ‘Atoms for Peace’ mission has lost none of its relevance. The Agency has successfully adapted to changing times and the evolving needs of Member States.”

In the area of nuclear technology, the Agency, together with the World Health Organization (WHO), is helping to make radiotherapy, medical physics, nuclear medicine, and imaging services available to developing countries.

While cancer is reaching epidemic proportions in developing countries, many of them do not have the resources to deal with it, Mr. Amano noted. Several dozen African nations have no radiotherapy facilities at all. Among the Agency’s flagship activities is the Programme of Action for Cancer Therapy (PACT).

“But our efforts are just a drop in a vast ocean of human suffering. The world needs to mobilize its resources against cancer in a systematic way,” he stated, adding that the crisis must be addressed with a multi-pronged global effort to build awareness, develop diagnosis and treatment centres and train medical professionals.

In addition, the IAEA is working closely with African nations to suppress tsetse flies, which infest vast areas of the continent and transmits a parasitic disease that devastates livestock herds and spreads “sleeping sickness” among humans.

On nuclear verification, Mr. Amano voiced serious concern about the nuclear programme of the Democratic People’s Republic of Korea (DPRK).

“The DPRK’s statements concerning a third nuclear test and its intention to restart its nuclear facilities at Yongbyon, together with its previous statements about uranium enrichment activities and the construction of a light water reactor, are deeply regrettable,” he stated.

The Agency has not been able to implement any verification measures in the DPRK since April 2009, he added.

Last week, a “productive” meeting addressing past and present issues related to Iran’s nuclear programme took place in Vienna, during which the country presented a new proposal on practical measures as a constructive contribution to strengthening cooperation and dialogue with a view to the future resolution of all outstanding issues. A further meeting is set for 11 November in Tehran. 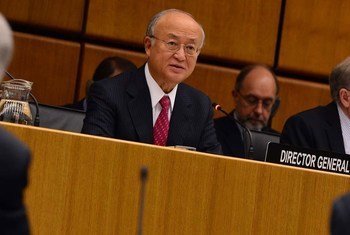 9 September 2013
The head of the United Nations atomic energy agency today stressed the need for both Iran and the Democratic People’s Republic of Korea (DPRK) to cooperate in resolving outstanding issues regarding their nuclear activities.