UNHCR/V. Tan
Fishermen's haunt by day, smugglers' den by night, this waterway on the outskirts of Sittwe is reported to be a common departure point for smugglers' boats.

5 November 2013
The United Nations refugee agency today deplored the loss of life in the recent boat tragedy off the western coast of Myanmar, and stressed the need for urgent action to avert such incidents.

According to available information, some 70 people, presumed to be Rohingya from Myanmar’s Rakhine state, were on the boat when it capsized on Sunday morning off the coast of the state capital Sittwe.

Eight survivors have been reported so far, while dozens of people, including women and children, are still missing and feared dead, a spokesperson for the UN High Commissioner for Refugees (UNHCR) told reporters in Geneva.

“As with the recent boat disasters on the Mediterranean, UNHCR’s worry is that similar tragedies will follow unless actions are taken by concerned countries to address the causes and reduce the risks for those involved in dangerous journeys by sea,” said Adrian Edwards.

“2013 is by all accounts one of the worst years in terms of deadly incidents at sea,” he added.

UNHCR estimates that around 140,000 people remain internally displaced in Rakhine state following waves of inter-communal violence that started in June 2012. Those displaced include the Rohingya, ethnic Rakhine, Kaman and other communities. While most have moved into temporary shelters, the environment remains tense and longer-term solutions to displacement still need to be implemented.

Most Rohingya do not hold Myanmar citizenship and continue to face severe restrictions on their movements and suffer from discriminatory practices and denial of basic human rights, the agency pointed out. Many struggle to make a living and access services such as healthcare and education.

“It is unacceptable that people are driven by such desperation into life-risking journeys, often falling into the hands of ruthless smugglers,” Mr. Edwards stated.

“UNHCR stands ready to assist the Government of Myanmar to address the root causes of this outflow, including seeking ways to resolve the statelessness of the Rohingya population.”

To promote reconciliation and peaceful co-existence in Rakhine state, the Government and international community also need to address challenges such as the lack of development, Mr. Edwards said, noting that Rakhine is Myanmar’s second poorest state.

“In parallel, we are appealing to countries in the region to strengthen search and rescue operations to prevent further loss of life at sea,” he said. “We also urge regional governments to harmonize disembarkation and reception conditions and to offer temporary protection to people in need of international protection while durable solutions are sought.” 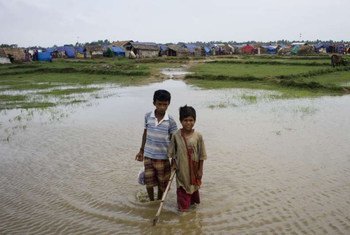 1 November 2013
The United Nations refugee agency is concerned that as the rainy season ends in Myanmar and the annual sailing season reopens, people from the Rakhine state are increasingly likely to try to flee, subjecting themselves to exploitation by smugglers.