4 November 2013
Portugal is facing the most critical economic and social crisis in its recent history, the United Nations labour agency today reported, calling for a new job-centred approach to the crisis.

“Much of the policy action so far has focused on reducing fiscal deficits and boosting competitiveness,” says Raymond Torres, head of the UN International Labour Agency’s (ILO) Research Department.

Since the start of the global crisis in 2008, one in seven jobs have been lost in the country, two-thirds of those in the past two years, according to “Tackling the job crisis in Portugal” released today by the ILO.

A large part of this deterioration occurred since the start of the financial assistance programme in 2011, with young workers and families with small children disproportionately affected.

The report describes the socio-economic situation in the country as “critical,” marked by unprecedented levels of unemployment, a drastic decline of productive investment and an economic recovery that is likely to be too weak to make a significant dent in the jobless figures

The report findings are being discussed today at a high-level ILO conference in the Portuguese capital of Lisbon.

Among its recommendations, the report highlights improved credit conditions for viable small firms.

“The establishment of a Eurozone ‘banking union’ would trigger a move towards sustainable investments and job recovery,” the report authors wrote.

Another suggestion is for promotion of apprenticeships, work experience and internships, and establishment of new partnerships between educational institutions, enterprises, worker representatives and young people themselves.

“Some of these policies will cost the public purse, but they would be short-term and would kick-start the job recovery process,” said Mr. Torres.

“The ILO can provide technical expertise to help the Portuguese government and its social partners put in place programmes that are suitable to their specific needs.” 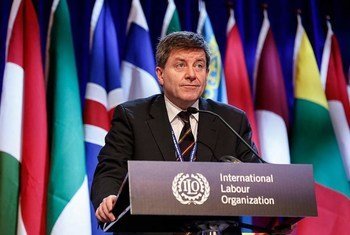