A senior United Nations official strongly condemned attacks against polling stations in northern Kosovo where municipal elections were taking place, and called on local and international authorities to establish order in the area.

“The attacks this evening against polling stations in northern Kosovo are utterly deplorable,” said the Special Representative of the Secretary-General for Kosovo, Farid Zarif.

Following the recent wave of violence during the election process, several polling stations in northern Kosovo were vandalised and individuals present were attacked.

Mr. Zarif strongly and categorically condemned “these uncivilized and criminal actions” and noted that they aimed to undermine the elections process through preventing the population from exercising their democratic right to vote.

“These destructive acts of hooliganism have no place in civilized and democratic societies and their perpetrators must be urgently held to account,” the Special Representative added.

Mr. Zarif urged all people involved with the Kosovo elections to remain calm, and for all residents to respect the democratic process and cooperate with local and international law enforcement.

On the eve of the elections, the UN Mission in Kosovo, which Mr. Zarif heads, strongly condemned attacks on at least two of the more than 8,000 candidates vying for positions in the city council and as mayors.

Secretary-General Ban Ki-moon had urged respect for diversity and wide participation in the polls, saying they would constitute a milestone in the strengthening of peace and security in Kosovo.

Kosovo declared independence from Serbia in February 2008 following years of ethnic tensions, but Serbia has not recognized the declaration. The European Union has since been facilitating dialogue between the parties on a range of practical matters.

Plans for the elections were part of the landmark agreement between Belgrade and Pristina initialed in Brussels under the auspices of the European Union High Representative for Foreign Affairs and Security Policy, Catherine Ashton. 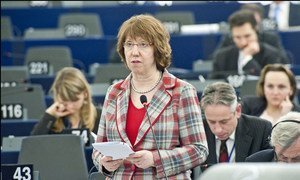 On the eve of municipal elections in Kosovo, the United Nations mission there said that police and international security are undertaking all necessary measures to ensure a safe election period following attacks at least two of the candidates.