UN Photo/JC McIlwaine
Security Council voting to approve a 12,600-strong UN peacekeeping operation to take over from the African-led mission in Mali on 1 July 2013.
3 November 2013

The Security Council and the United Nations agency tasked with defending press freedom have strongly condemned the kidnapping and assassinations of two French journalists in northern Mali, and called on the Government to bring the perpetrators to justice.

Armed gunmen kidnapped and executed Ghislaine Dupont and Claude Verlon yesterday near the city of Kidal.

The Director-General of the UN Scientific, Educational and Cultural Organization (UNESCO), Irina Bokova, called the killings “a heinous crime that stands condemned by the whole world.”

The bodies of the journalists, on assignment for Radio France International (RFI), were found by French military forces shortly after riddled with bullets, according to the Paris-based agency.

In a statement today, Ms. Bokova, who visited northern Mali last February, said Ms. Dupont and Mr. Verlon “paid the highest possible price for doing their job; for defending freedom of expression and people's right to information; for contributing –through their reporting – to Mali's struggle against violence and extremism, and its efforts to rebuild.”

Late last night, the 15-member Security Council expressed its condolences to the families of the victims, as well as the French Government.

“In accordance with international humanitarian law, journalists, media professionals and associated personnel engaged in dangerous professional missions in areas of armed conflict are generally considered as civilians and shall be respected and protected as such,” the statement reiterated.

The Council members demanded that “all parties to an armed conflict comply fully with the obligations applicable to them under international humanitarian law, including as related to the protection of civilians in armed conflict.”

They called on the Government of Mali to “swiftly investigate the case” and to hold those responsible to account.

In its statement, the Council also reaffirmed that any acts of terrorism are “criminal and unjustifiable, regardless of their motivation, wherever, whenever and by whomsoever committed”.

The Members also reiterated their full support to the UN Mission in Mali and the French forces, and called on all parties to cooperate fully with the peacekeeping Mission.

The Security Council set up the UN Multidimensional Integrated Stabilization Mission in Mali (MINUSMA) in April to support the West African country's recovery from a coup and the occupation of its north by Islamist fundamentalists, its transition back to stability and democratic governance, and the promotion of human rights and provision of humanitarian aid.

Ms. Dupont and Mr. Verlon are the first journalists killed in Mali this year, and are remembered on the dedicated webpage, UNESCO Condemns Killing of Journalists. 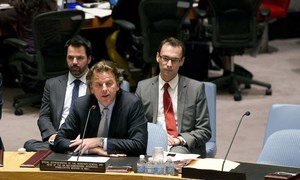 Important steps have been taken recently to help restore constitutional order and stability in Mali, including successful presidential elections, the top United Nations envoy there said today, while noting some key remaining tasks such as addressing security and humanitarian challenges.