On the eve of municipal elections in Kosovo, the United Nations mission there said that police and international security are undertaking all necessary measures to ensure a safe election period following attacks at least two of the candidates.

“UNMIK (UN Mission in Kosovo) strongly condemns the recent violence against figures involved in the election process,” a spokesperson said, adding that while the nature of their cause is still being investigated, “such attacks must be condemned by all.”

The democratic process demands an environment free of violence and intimidation, the Mission stressed.

“Any attempts to influence political developments by these means will fail, and only discredit those who might encourage or engage in such behaviour to forward a particular viewpoint,” it underscored.

The polls are due to open tomorrow morning in Kosovo, which declared its independence from Serbia in February 2008 following years of ethnic tensions, but which Serbia has not recognized.

More than 8,000 candidates vying for positions in the city council and as mayors.

Secretary-General Ban Ki-moon has called for a respect for diversity and wide participation in the elections.

“Free and fair elections this Sunday will constitute a milestone in the strengthening of peace and security in Kosovo,” he said in a statement issued yesterday.

Plans for the elections were part of the landmark agreement between Belgrade and Pristina initialed in Brussels under the auspices of the European Union High Representative for Foreign Affairs and Security Policy, Catherine Ashton. 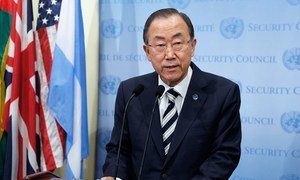 Secretary-General Ban Ki-moon is calling for a respect for diversity and wide participation in this weekend's municipal elections in Kosovo.