ECCC
Khieu Samphan (left) and Nuon Chea in the Trial Chamber of the Extraordinary Chambers in the Courts of Cambodia (ECCC).
31 October 2013

Two of the surviving former leaders of Cambodia’s Khmer Rouge regime charged with mass killings during the 1970’s requested to be acquitted today, as closing arguments began at the United Nations-backed war crimes tribunal in the south-east Asian country.

Nuon Chea, 87, and Khieu Samphan, 81, are before the Extraordinary Chambers in the Courts of Cambodia (ECCC), on charges of crimes against humanity for their roles in the regime which ruled from 1975-1979. Nearly 2 million people are thought to have died during that period of forced labour, starvation, torture and execution.

The ECCC is a hybrid court established in 2006 to try senior leaders and those most responsible for the crimes committed during the Khmer Rouge regime. The UN has deployed international judges, prosecutors and staff to the ECCC through the UN Assistance to the Khmer Rouge Trials. More than 100,000 people have attended hearings since the trial began, many of them survivors of the Khmer Rouge regime who travelled far to watch the proceedings.

As for today’s proceedings, Mr. Nuon, also known as ‘Brother Number Two,’ claimed that he was not responsible for any of the crimes alleged by the prosecution although he expressed remorse over moral responsibilities as the deputy secretary of the Communist Party of Kampuchea.

“I did not plan to commit crimes: I did not encourage anyone to commit crimes, either,” he said. “Nevertheless, I’d like to express my deepest remorse to Cambodian people who suffered during the Democratic Kampuchea.”

For his part Mr. Khieu, said he had lost faith in the tribunal. “I have a strong feeling that no matter how hard I try to explain the truth, they (the Court) will only turn their deaf ears. They will not pay attention to what I have to say and would use it against me.”

The trial of began in November 2011 and concluded today with Mr. Noun and Mr. Khieu’s final statements, following closing submissions by the prosecution and civil parties in the last two weeks. During the course of two years, 92 individuals, including 31 civil parties gave testimony. The ECC is expected to deliver verdicts in the first half of 2014.

Last week, the prosecution called for a life sentence, the maximum penalty available in Cambodia, arguing that the two accused were the mastermind of criminal policies that forced millions of people to march thousands kilometres away from home to unknown places in inhumane conditions and killed hundreds of former Lon Nol officials and soldiers at Tuol Po Chrey in the northwest province of Pursat. 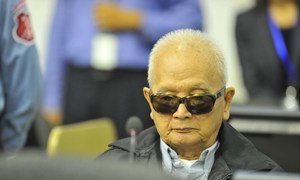 The trial chamber of the United Nations-backed court in Cambodia that is trying those accused of genocide and crimes against humanity today ruled that Nuon Chea, also knows as “Brother Number Two” to Khmer Rouge leader Pol Pot, is fit for trial.