Harmful practices inflicted on women and girls can never be justified in the name of freedom of religion or belief, an independent United Nations human rights expert told a General Assembly committee dealing with social, humanitarian and cultural issues today.

The expert’s latest report, which he presented to the Third Committee, focused on two human rights, namely freedom of religion or belief and gender equality. “My main message is that there is much more room for synergies between those two rights than people generally assume,” he told reporters after his presentation.

“Often you find the assumption that, you go either for religion or for gender emancipation and you can’t really combine the two, which I would find not only wrong but dangerous.”

The expert urged Governments and civil society to look for these synergies, noting that in virtually all traditions, there are persons or groups who use their freedom of religion or belief to promote equality between men and women, often in conjunction with innovative interpretations of religious sources and traditions.

“The purpose must be to create family law systems that fully respect equality between men and women while at the same time doing justice to the broad reality of religious or belief diversity, including persuasions that go beyond the realm of traditionally recognized religions,” he stated.

One particularly grave abuse when freedom of religion or belief clashes with gender equality is forced conversion in combination with forced marriage, said Mr. Bielefeldt.

“In a number of countries, women or girls from religious minorities run the risk of being abducted with the purpose of forcing them to convert to mainstream religion – often in connection with an unwanted marriage.”

The expert’s report offers recommendations to, among other things, integrate a gender perspective into programmes designed to protect and promote freedom of religion or belief.

Independent experts or special rapporteurs are appointed by the Geneva-based UN Human Rights Council to examine and report back, in an unpaid capacity, on specific human rights themes. They also make annual presentations to the General Assembly’s Third Committee. 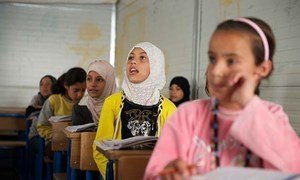 Marking International Day of the Girl Child, senior United Nations officials today highlighted the power of innovation to get more girls in classrooms and improve the quality of learning for all children.