27 October 2013
United Nations Secretary-General has strongly condemned today the killing by M23 rebels of a UN peacekeeper in strife-riven eastern Democratic Republic of the Congo (DRC) and pledged the Organization's ongoing commitment to take “all necessary actions” to protect civilians in the country.

In a statement issued by his spokesperson in New York, the UN chief condemned “in the strongest terms” the killing of a Tanzanian peacekeeper who came under fire from the 23 March Movement (M23) in the eastern DRC.

According to the statement, the attacks occurred as the UN Organization Stabilization Mission (MONUSCO) supported action being carried out by Congolese Government Forces (FARDC) to protect civilians on the Kiwanja-Rutshuru axis, 25 kilometres north of Goma, which the main city in the vast country's eastern region.

“The Secretary-General offers his sincere condolences and sympathy to the family of the victim, and to the Government of the United Republic of Tanzania,” the statement says.

Further to the statement, Mr. Ban says the UN remains committed to taking all necessary actions in line with Security Council resolution 2098 (2013) to protect civilians in eastern DRC.

By that resolution, adopted in late March, the Council approved the creation of its first-ever “offensive” combat force, intended to carry out targeted operations to “neutralize and disarm” the notorious M23, as well as other Congolese rebels and foreign armed groups in the east.

He said at that time that the Mission reported that Government forces and M23 had exchanged mortar and machine gun fire near Kibumba, around 15 km north of Goma.

Yesterday, MONUSCO chief Martin Kobler and Special Envoy of the Secretary-General to the Great Lakes Region, Mary Robinson, jointly expressed their concern about the ongoing violence in eastern DRC and urged all parties to exercise “maximum restraint” and to return to peace talks in the Ugandan capital, Kampala.

In the past year, clashes have continued sporadically throughout the DRC's eastern region, with rebels briefly occupying Goma, in November 2012. The fighting has displaced more than 100,000 people, exacerbating an ongoing humanitarian crisis in the region which includes 2.6 million internally displaced persons and 6.4 million in need of food and emergency aid. 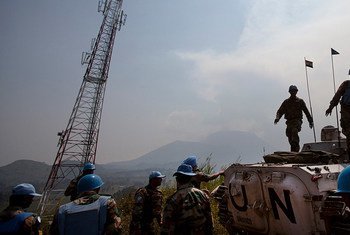 25 October 2013
The United Nations stabilization mission in the Democratic Republic of the Congo (DRC) is on “high alert” following early morning clashes between Congolese Government forces and M23 rebels in the vast country’s restive eastern region.