Speaking to journalists in New York, the UN Special Rapporteur on the human rights situation in Myanmar, Tomás Ojea Quintana, called on the Organization’s 193 Member States to focus on human rights in their support to the South-east Asian country.

“My most important message is for the international community to remain engaged on the human rights situation in Myanmar in the context of its transition,” Mr. Quintana said.

“Myanmar has made some important steps towards democratic reform and national reconciliation,” he added, citing the release of hundreds of prisoners of conscience, greater media freedom, an active Parliament and the prospect of a national ceasefire accord next month.

“These developments need to be supported and encouraged, but it is also important to highlight the human rights shortcomings that exist in the reform process and work to find solutions,” he stressed.

The Special Rapporteur made his comments following a briefing to the UN General Assembly’s main social, humanitarian and cultural body (Third Committee) which has been hearing from the UN experts all this week and will continue to be briefed next week.

The situation in the Rakhine State, which has been the site of inter-communal violence since June 2012, remains “very serious”, the Special Rapporteur said.

Mr. Quintana highlighted a “pattern of discrimination” against the Rakhine community, but also acknowledged that the Government is showing a greater willingness to address the situation.

Clashes between ethnic Rakhine Buddhists and Rohingya Muslims had led the Government to declare a state of emergency. Some 75,000 people were uprooted in the first wave of riots and another 36,000 were displaced by a second wave of unrest in October last year.

“The Government has yet to fulfil its obligation under international human rights law to investigate the allegations of widespread human rights violations, including by the security forces, reportedly committed during and after last year’s violence and to hold the perpetrators to account,” he said in a statement from the Office of the High Commissioner for Human Rights (OHCHR).

Turning to the fighting in Kachin, Mr. Quintana highlighted the role of key leaders have played in inciting violence, as well as the negative role of local media.

In his report which he detailed, the Special Rapporteur emphasized the significance of the 13 ceasefire agreements that have been signed with ethnic armed groups, and the prospect of a national ceasefire accord but cautioned that the Military “needs to be fully on board” with the agreements.

The UN expert also noted the release of over 950 political prisoners since May 2011, “I urge the Government to listen to local grievances and release the persons currently being detained for peacefully protesting on these issues,” he said. 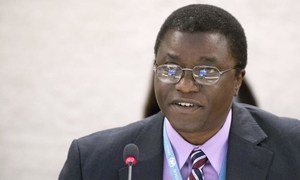 A United Nations independent expert today urged the Government of Serbia and the authorities in Kosovo to cooperate and discharge their primary responsibility for implementing lasting solutions for internally displaced persons, particularly as Serbia is in the process of being admitted into the framework of the European Union.