The United Nations stabilization mission in the Democratic Republic of the Congo (DRC) is on “high alert” following early morning clashes between Congolese Government forces and M23 rebels in the vast country’s restive eastern region.

UN spokesperson Martin Nesirky said that the mission – known by the acronym MONUSCO – reported that early today, the Congolese army (FARDC) and M23 exchanged mortar and machine gun fire near Kibumba, around 15 km north of the flashpoint city of Goma.

The UN mission reported that, “approximately 5,000 civilians from Kibumba crossed the border into Rwanda this morning.”

As the fighting continues, MONUSCO continues to closely monitor the situation, the UN spokesman added.

The Mission is carrying out aerial reconnaissance of the area and has also asked that the Extended Joint Verification Mechanism investigates reports of a shell landing in Kageyo, Rwanda, he said.

In the past year, clashes have continued sporadically throughout the DRC's eastern region, with rebels briefly occupying the main city, Goma, in November 2012. The fighting has displaced more than 100,000 people, exacerbating an ongoing humanitarian crisis in the region which includes 2.6 million internally displaced persons and 6.4 million in need of food and emergency aid. 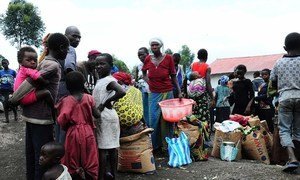 Facing a $70 million funding shortfall, the United Nations World Food Programme (WFP) warned today that starting as early as November, the agency and its partners will be forced to scale back activities in strife-torn provinces of the Democratic Republic of the Congo (DRC).