Victims of the violent post-election crisis that gripped Côte d’Ivoire two years ago must not be forgotten, an independent United Nations human rights expert stressed today, as he wrapped up his latest visit to the West African nation.

Côte d’Ivoire’s 2010 presidential election, meant to be the culminating point in a long-running UN-backed peace process, resulted in months of violence when former President Laurent Gbagbo refused to step down after losing to Alassane Ouattara. Mr. Gbagbo finally surrendered the following April.

The Independent Expert on the situation of human rights in Côte d’Ivoire, Doudou Diène, said the situation of the victims of the crisis is at the core of the implementation of justice, reparation and the reconstruction of democracy in the country.

He said progress already made should be reinforced by “the promotion of an inclusive pluralism, a vigorous fight against impunity, the promotion of equity in the judiciary and the improvement of the socio-economic conditions of the population.”

Concerning the country’s truth and reconciliation commission, Mr. Diène hoped that its mandate will be renewed following the issuance of its mid-term report, and that it will be able to achieve much in its mission to attain truth and the conditions for reconciliation.

During his visit, the expert met high-level officials, as well as representatives of political parties, UN agencies and civil society. He also visited detention centres through the country and Simone Gbagbo, the wife of the former leader, in Odiénné.

Mr. Diène will present a comprehensive report on the human rights situation in Côte d’Ivoire to the Human Rights Council in Geneva in 2014.

Independent experts or special rapporteurs are appointed by the Council to examine and report back on a country situation or a specific human rights theme. The positions are honorary and the experts are not UN staff, nor are they paid for their work. 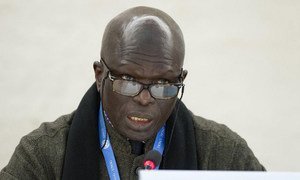