UN Photo/Pierre Albouy
Nicole Améline, Chairperson of the Committee on the Elimination of Discrimination Against Women (CEDAW).
23 October 2013

States that have ratified the UN Convention on the Elimination of All Forms of Discrimination against Women are obliged to uphold women’s rights when they are involved in fighting, and when they are providing peacekeeping troops or donor assistance for conflict prevention, humanitarian aid or post-conflict reconstruction, according to the document.

General Recommendation No. 30, adopted last week by the Geneva-based Committee on the Elimination of Discrimination against Women (CEDAW), says States parties should also exercise due diligence in ensuring that non-State actors, such as armed groups and private security contractors, be held accountable for crimes against women.

“This document is comprehensive. It includes recognition of women’s central role in preventing conflict and in rebuilding devastated countries,” said Nicole Ameline, the Chairperson of the 23-member Committee.

“Women’s experiences are regularly dismissed as irrelevant for predicting conflict, and women’s participation in conflict prevention has historically been low,” Ms. Ameline said. “But in reality, there is for example a strong correlation between an increase in gender-based violence and the outbreak of conflict.”

The General Recommendation, drafted over a three-year period, spells out States’ obligations under the Convention, including due diligence obligations to prevent, investigate, punish and ensure redress for crimes against women by non-State actors.

“No longer is it enough to say that such acts are outside the scope of State responsibility of the Convention,” Ms. Ameline stressed.

CEDAW adopted the recommendation on 18 October, the same day the UN Security Council adopted resolution 2122, which stresses the importance of women’s involvement in conflict prevention, resolution and peace-building.

♦ Receive daily updates directly in your inbox - Subscribe here to a topic.
♦ Download the UN News app for your iOS or Android devices.
women|conflict 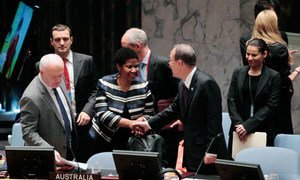