Facing a $70 million funding shortfall, the United Nations World Food Programme (WFP) warned today that starting as early as November, the agency and its partners will be forced to scale back activities in strife-torn provinces of the Democratic Republic of the Congo (DRC).

“The likely impact would be an unfortunate reduction of support to school children, refugees and returnees,” WFP spokesperson, Elisabeth Byrs, told journalists in Geneva.

The UN agency will be forced to scale back its area of coverage in some provinces as it has received only half of the funding it needs to continue its planned relief operations in the country over the next six months.

Unless new funds are quickly confirmed, WFP will be unable to continue meeting the needs of 300,000 internally displaced people in the eastern North Kivu province, who had already been receiving half rations for the last six months, Ms. Byrs said.

Prices of food have increased in the DRC since May 2013, especially the price of maize flour, and particularly in insecure areas such as Goma which registered an eight per cent spike.

WFP said it is prioritizing life-saving assistance to the most vulnerable groups, such as displaced women and children, and would strive to maintain those activities.

Fighting over the past year in eastern DRC has displaced more than 100,000 people, exacerbating an ongoing humanitarian crisis in the region which already includes 2.6 million IDPs and 6.4 million in need of food and emergency aid. 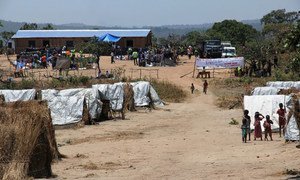 The United Nations World Food Programme (WFP) today warned that it does not have the resources to provide assistance to a growing number of people displaced by fighting in eastern Democratic Republic of the Congo (DRC).