22 October 2013
An independent United Nations human rights expert is hailing a key breakthrough in inter-faith communication between Muslim and Greek Orthodox leaders in Cyprus, stressing that it could have a positive impact on the reconciliation process as a whole.

“I am very pleased about the recent positive developments and improved climate of interreligious communication in Cyprus,” the Special Rapporteur on freedom of religion or belief, Heiner Bielefeldt said.

“While the Cyprus conflict is not per se a religious conflict, all cooperation between the religious leaders had stopped when the bi-communal conflict between Greek Cypriots and Turkish Cypriots escalated fifty years ago,” he added.

The Grand Mufti of Cyprus, Talip Atalay, crossed the Green Line dividing the island on 18 October and held service at Hala Sultan Mosque near Larnaca for the first time. The UN Office of the High Commissioner for Human Rights (OHCHR) credits the event on an agreement reached with the Greek Orthodox Archbishop Chrysostomos II, who personally facilitated Mr. Atalay’s access to the areas controlled by the Government of the Republic of Cyprus.

Two days earlier, Bishop Christoforos of Karpasia, who had been prevented for the previous 18 months from visiting the northern part of Cyprus and his diocese, was allowed to visit and worship at the monastery Apostolos Andreas on the Karpass peninsula in the north-east of Cyprus.

“These may seem like small steps, but they constitute a huge leap for the religious communities concerned,” Mr. Bielefeldt said. “I consider it a breakthrough for religious freedom on the whole island.”

The UN expert praised the religious leaders during a video conference last Friday, and encouraged them to create an inclusive institutional framework to further promote ongoing communication, such as an Interreligious Council for Peace in Cyprus.

Independent experts or special rapporteurs are appointed by the Geneva-based Human Rights Council to examine and report back, in an unpaid capacity, on specific human rights themes.

These latest efforts are in line with the Special Rapporteur’s latest recommendations to the Council, in which he stressed the importance of bridging human rights protection gaps so that all people can enjoy fundamental rights, including freedom of religion or belief, wherever they live. 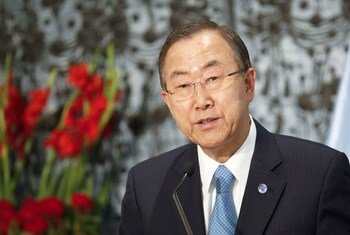 23 September 2013
Secretary-General Ban Ki-moon the President of Cyprus, Nicos Anastasiades, today to discuss the UN-sponsored talks on preparations for the resumption of negotiations aimed at achieving a comprehensive settlement in Cyprus.