17 October 2013
The United Nations food agency today highlighted the quinoa, known as an Andean ‘super food,’ and other underused crops in the fight against hunger.

The United Nations food agency today highlighted the quinoa, known as an Andean ‘super food,’ and other underused crops in the fight against hunger.

“In Peru, we are proud to be the cradle of this ancient grain and one of the world’s major producers. We think it’s important to revive ancestral knowledge and practices,” said Peru’s First Lady and Special Ambassador for the International Year of Quinoa, Nadine Heredia during a symbolic harvest and panel discussion at the Food and Agriculture Organization’s (FAO) headquarters in Rome.

Quinoa contains all the essential amino acids, trace elements and vitamins, but no gluten.

The small crop is widely adaptable, thriving in temperatures ranging from -8 degrees Celsius to 38 degrees Celsius, at sea level or 4,000 metres above, and is not impacted by low moisture.

Bolivia and Peru account for more than half of the annual 70,000 tons of quinoa produced, according to FAO. While its cultivation is expanding to include Kenya, India, North America and Europe, most of the crop is farmed through traditional means in the Andean altiplano.

In 2011, the UN General Assembly adopted a resolution declaring that 2013 would be the International Year of Quinoa. In doing so, the 193-member body sought to recognize the Andean indigenous people “who have managed to preserve quinoa in its natural state as food for present and future generations, through ancestral practices of living in harmony with nature.” The theme for this year is “Quinoa, a future sown thousands of years ago.”

The symbolic quinoa harvest was gathered by hand, as has been done for centuries in the Andean region.

During the panel discussion, FAO Director-General José Graziano da Silva pointed to the numerous achievements made over these last months, and he thanked the two Andean countries for the support for numerous activities carried out across the globe.

“We’ve done everything with the conviction that quinoa and other underutilized grains and crops can take on a fundamental role in eradicating hunger and promoting healthier diets,” Mr. da Silva said. “This year, quinoa became our new ally against hunger.”

FAO also hosted a conference entitled ‘Quinoa in the world: experiences and potential,’ to highlight the joint work being carried out by FAO and the Bolivian Government to ensure that quinoa is produced in a sustainable manner and to demonstrate its potential for development in Europe.

Among the participants were the Bolivian minister of rural development and lands, Nemecia Achacollo, a Bolivian farmer, and an FAO expert, who described the progress made over the past year thanks to technical assistance. Italian experts also shared their experience in producing quinoa in Italy. 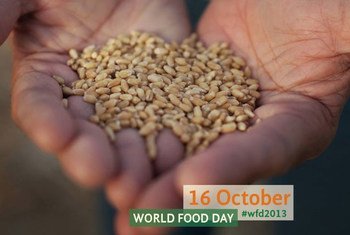