Although human trafficking is recognized as modern-day slavery, many victims of the scourge in the Greater Mekong Sub-region of South-East Asia are not given adequate help for reintegration into their communities, according to a United Nations-backed report released today.

“Any support offered to victims of trafficking needs to be given in a way that restores a sense of control for the victims over their own lives,” the regional project manager for the UN Inter-agency Project on Human Trafficking (UNIAP), said of the study, commissioned by the Governments of the Coordinated Mekong Ministerial Initiative against Trafficking (COMMIT) - Cambodia, China, Lao People’s Democratic Republic, Myanmar, Thailand and Vietnam.

“When support is provided in a way that does not respect the will of the victims, or is even provided against their will, this may result in further trauma and a continuation of their victimization.”

She called the report “an important first step in understanding the reintegration experiences of trafficking victims,” which will help inform service providers and policymakers on how to improve assistance “to ensure that trafficking victims in the region can overcome their experiences and go on to lead happy, healthy and productive lives.”

While estimates of the number of trafficked persons vary considerably, it is widely agreed that those reached and assisted is a small fraction of the total. The Mekong region compared to many other parts of the world, contains very diverse patterns of human trafficking – internal and cross-border; highly organized or small-scale; sex and labour, through both formal and informal recruitment mechanisms.

Children from Cambodian or Myanmar border areas and rural Vietnam or China are trafficked to beg or sell flowers on the streets of larger cities, while women and girls from Thailand, Cambodia, Myanmar and Vietnam are increasingly being found in forced prostitution or domestic servitude in Malaysia. Trafficked Thai women are also found in the sex trade in Hong Kong, Taiwan, Japan, South Africa, the Middle East, the United States and Western Europe.

The report – After Trafficking: Experiences and Challenges in the (Re)integration of Trafficked Persons in the Greater Mekong Sub-region – was prepared by the NEXUS Institute, an independent international human rights research and policy centre. with support from UNIAP, UN and civil society partners dealing with the issue of human trafficking.

Researchers travelled throughout the region to conduct in-depth interviews with over 250 survivors of trafficking, collecting their stories and experiences to give victims a voice as they overcome the horror of their experiences and piece their lives back together.

One of the key features and most damaging aspects of human trafficking is that it robs individuals of their freedom of will and action. It has a devastating effect on the lives of its victims and their families, which is further compounded by numerous factors as victims attempt to return to their lives without receiving assistance, or when they receive poor quality or ineffective assistance.

The report found that that too few trafficked persons receive what could be reasonably termed comprehensive care.” Others decline assistance, sometimes in the face of acute need, because it does not meet their needs or mesh with their life situation after trafficking. Still others receive assistance in programmes where the quality and scope are inadequate. Issues of discrimination, maltreatment and substandard care are also present.

♦ Receive daily updates directly in your inbox - Subscribe here to a topic.
♦ Download the UN News app for your iOS or Android devices.
human trafficking 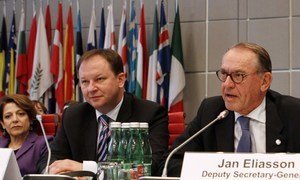