“This afternoon, an unarmed MONUSCO [United Nations Organization Stabilization Mission in the DRC] helicopter came under direct fire from positions held by the March 23 (M23) rebel movement in the Rumangabo region,” the mission said in a statement issued this afternoon.

The Head of MONUSCO, Martin Kobler, strongly condemned the attack and declared that: “MONUSCO air missions shall proceed.”

Mr. Martin Kobler further said: “M23 rebels will not prevent us from using the Congolese air space. We shall continue doing all in our power to defend civilian populations including by using force if necessary.”

In the past year, clashes have continued sporadically throughout the DRC’s eastern region, with rebels briefly occupying the main city, Goma, in November 2012. The fighting has displaced more than 100,000 people, exacerbating an ongoing humanitarian crisis in the region which includes 2.6 million internally displaced persons and 6.4 million in need of food and emergency aid. 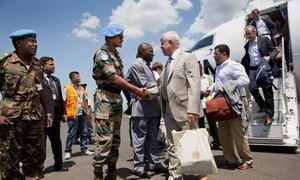 As part of an official visit to countries in Africa’s Great Lakes region, the 15 members of the United Nations Security Council have over the past few days met with various heads of State to discuss the implementation of the broad based peace accord agreed earlier this year.