UNISDR
UN global survey explains why so many people living with disabilities die in disasters.

10 October 2013
A high proportion of persons with disabilities die or suffer injuries during disasters because they are rarely consulted about their needs and Governments lack adequate measures to address them, according to a United Nations survey released today ahead of the International Day for Disaster Reduction.

The online survey, produced by the UN Office for Disaster Risk Reduction (UNISDR) and partners, consulted nearly 6,000 persons with disabilities in 126 countries on how they cope and prepare for disasters.

“The results of this survey are shocking. It clearly reveals that the key reason why a disproportionate number of disabled persons suffer and die in disasters is because their needs are ignored and neglected by the official planning process in the majority of situations,” said the Secretary-General’s Special Representative for Disaster Risk Reduction, Margareta Wahlström.

Released ahead of the International Day for Disaster Reduction, commemorated on annually on 13 October and which this year recognizes the critical role of persons with disabilities in fostering disaster resilience, the survey shows that inclusion of disability must be a central concern in all emergency communications.

It notes that the challenges of evacuation ranged from having a degree of difficulty of hearing, seeing, walking or climbing steps and having difficulty communicating.

If given sufficient time, the percentage of those who could evacuate with no difficulty almost double, rising from 20 per cent to 38 per cent, which underlined the importance of early warning systems and ensuring that warnings reach all members of the community.

In addition, many respondents said that if they an early warning they would take measures that would better prepare them for disasters. For example, one respondent said that if he had prior knowledge of bad weather overnight, he would sleep in his wheelchair to be able to take cover quickly. Another respondent said an early warning on bad weather would allow him to stock up on medicines, and another one expressed concern of being unable to receive alerts because he cannot hear sirens.

The 22-question survey also shows that 71 per cent of respondents have no personal preparedness plan for disasters and only 31 per cent always have someone to help them evacuate while 13 per cent never have anyone to help them.

Persons with disabilities also face difficulties after disasters have struck, as emergency and care systems are poorly designed for people depending on help or having disabilities, said Ms. Wahlström, briefing the press in New York as part of the activities under way at Headquarters to mark the 2013 International Day.

“Lack of inclusion of persons with disabilities in the planning system leads to systems being inadequate,” she said. “The survey shows that people largely depend on friends and family for safety and it shows that even when they are early warning systems they are not necessarily adjusted to people who don’t hear, or people who are colour blind for example.

She added that countries run the risk of “bundling” what disabilities entail and said this highlights the importance of incorporating multiple perspectives from persons with disabilities.

The top five hazards or disaster risks faced by survey respondents were floods, extreme weather, tornados, drought, and earthquakes. UNISDR said it has decided to continue the survey until the end of the year to expand the sample.

“UNISDR will ensure that [respondents’] knowledge and experiences are taken fully into consideration at the 2015 World Conference on Disaster Risk Reduction when UN Member States meeting in Japan will adopt a new global framework for disaster risk reduction to replace the current Hyogo Framework for Action,” Ms. Wahlström said. 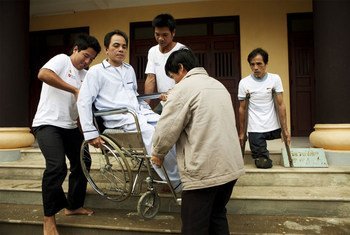 29 July 2013
A United Nations online survey launched today seeks to provide insight into how to reduce risk and help persons with disabilities around the world cope with and prepare for disaster events.