The United Nations remains committed to do all that it can do to help the people of Haiti overcome the cholera epidemic, a spokesperson for the world body said today.

“The United Nations is working on the ground with the Government and people of Haiti both to provide immediate and practical assistance to those affected, and to put in place better infrastructure and services for all,” Farhan Haq told a news conference in New York.

His comments came in response to questions regarding a class action lawsuit filed today in a United States Federal Court in New York in connection with the cholera outbreak in the aftermath of the devastating 2010 earthquake. The suit calls on the UN to compensate victims of the epidemic.

Over 650,000 infections and more than 8,000 deaths have been reported by the Government of Haiti since the disease, which is typically contracted through contaminated food or water, appeared in the country in October 2010.

“As there are legal processes under way, we cannot make any further comment on this particular situation.”

In December 2012, Secretary-General Ban Ki-moon launched an initiative for the elimination of cholera in Haiti and the Dominican Republic that focuses on prevention, treatment and education.

The initiative supports an existing campaign – known as the Initiative for the Elimination of Cholera in the Island of Hispaniola – established by the Presidents of the two countries. 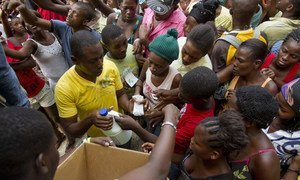 The United Nations today announced a new initiative to help eliminate cholera in Haiti and the Dominican Republic, the two nations that make up the Caribbean island of Hispaniola.