UN Photo/Hend Abdel Ghany
An advance team of the UN and the Organization for the Prohibition of Chemical Weapons (OPCW) arriving in Damascus, Syria, on 1 October 2013.
9 October 2013

“We have urged all parties in Syria to be cooperative and to contribute positively to this mission,” the OPCW’s Director-General, Ahmet Üzümcü, said during a press conference in The Hague, and added that temporary ceasefires will permit the experts to carry out their work.

“Much depends on the situation on the ground,” he said, stressing that the deadline for destroying the chemical weapons is “extremely tight” and that there have been significant logistical and security challenges.

“I think that the elimination of those weapons is in the interest of all. Therefore, if we can assure some cooperation by all parties and some temporary ceasefires could be established in order to permit our experts to work in a permissible environment… I think the targets could be reached,”

The UN Security Council unanimously adopted a resolution two weeks ago calling for the speedy implementation of procedures drawn up by the OPCW for the “expeditious destruction of the Syrian Arab Republic’s chemical weapons programme and stringent verification thereof.”

The destruction of chemical weapons facilities, stocks and associated material is the responsibility of the Syrian Government, since neither the OPCW nor the UN is mandated to conduct actual destruction activities.

An advance team for the UN-OPCW mission began its work on 6 October, and Mr. Üzümcü said some equipment has already been destroyed. He added that first verification activities have to be completed by the end of this month and production facilities will have to be rendered unusable by that time as well, with the view of destroying all chemical weapons capabilities by mid-2014.

Mr. Üzümcü said Syrian authorities have been cooperative so far, and added that 12 additional experts were deployed to Damascus, the capital, today.

The Council passed its resolution after Syria agreed to join the Chemical Weapons Convention in the wake of a chemical attack in August that reportedly killed hundreds of people in a Damascus suburb.

In a letter earlier this week to the Security Council proposing the formal establishment of the Joint OPCW-UN Mission, Secretary-General Ban Ki-moon called that attack an “especially disturbing” event in a conflict that has already killed over 100,000 people and driven some 6.5 million others from their homes since protesters first sought the ouster of President Bashar al-Assad’s Government in March, 2011.

Mr. Ban proposed that the Joint Mission will work in three phases, the first focusing on establishing an initial presence in Damascus and developing an initial operating capability, including verification activities through talks with the Government and planning for site visits.

During phase three, which the UN chief said “will be the most difficult and challenging phase…an operation the likes of which, quite simply, have never been tried before,” the Joint Mission will be expected to support, monitor and verify the destruction of a “complex chemical weapons programme involving multiple sites spread over a country engulfed in violent conflict, which includes approximately 1,000 metric tonnes of chemical weapons, agents and precursors that are dangerous to handle, dangerous to transport and dangerous to destroy.” 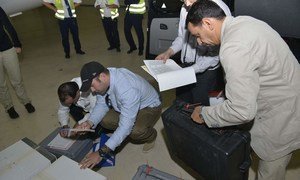 Nearly 100 United Nations and chemical weapons experts will be deployed over the coming months in a joint mission overseeing the destruction of Syria’s chemical weapons stockpiles, with many members of the team to be based in Cyprus due to the dangers on the ground in the war-torn country, under a proposal submitted by Secretary-General Ban Ki-moon.