Secretary-General Ban Ki-moon strongly condemned the violence in Egypt which killed more than fifty people during a national holiday on Sunday, and today’s attacks against military personnel and facilities, which reportedly killed eight people and injured many more.

“The Secretary-General once again stresses the importance of peaceful protest, respect for freedom of assembly and commitment to non-violence,” his spokesperson said in a statement in which the United Nations chief also conveyed his condolences to the families of those killed and well wishes to those recovering.

Ahead of the announced demonstrations, Mr. Ban on Friday had voiced serious concern at the prospect of violence.

“The Secretary-General continues to underscore the need for political inclusion, full respect for human rights, including of those detained in prison, and the rule of law as the basis for a peaceful, democratic transition in Egypt,” the spokesperson said in today’s statement.

“These are the same principles to which the Egyptian authorities themselves have committed in the roadmap they have set forth,” he added.

Mr. Ban and other senior UN officials have repeatedly stressed that the authorities and the political leaders share a responsibility to end the widespread outbreak of violent protests and excessive use of force which have led to hundreds of deaths and thousands of injuries.

The country has been undergoing a democratic transition following the toppling of President Hosni Mubarak two years ago in the wake of mass protests. In July, renewed protests, in which dozens of people were killed and wounded, led to the Egyptian military deposing Mohamed Morsy. The Constitution was then suspended and an interim government set up. 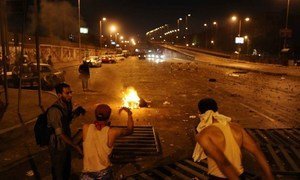 Voicing concern at serious violence today in Cairo, Secretary-General Ban Ki-moon stressed the importance of peaceful protest, respect for freedom of assembly and commitment to non-violence ahead of announced demonstrations marking a national holiday in Egypt on Sunday.