3 October 2013
Yemen’s future cannot be built on impunity for past abuses, a senior United Nations official stressed today, calling on the country to ensure that human rights are enshrined in its constitution and effectively carried out as it moves forward with its transition.

“I end this visit to Yemen with mixed feelings. I had some good meetings, and heard some important commitments, but the road ahead is still a steep one,” Deputy High Commissioner for Human Rights Flavia Pansieri said at a news conference in the capital, Sanaa.

“The future of Yemen cannot be built on impunity for past violations whenever and wherever they occurred,” she stated. “I urge an extra effort by the President and his Government to ensure that human rights are not sacrificed for the sake of political expediency. Rather, they must be enshrined in Yemen’s Constitution and laws and effectively implemented.”

Yemen has been undergoing a democratic transition, with a Government of National Unity, which came to power in an election in February 2012 and is led by President Abdrabuh Mansour Hadi Mansour. In March, the National Dialogue Conference was launched, bringing together a range of actors for consultations that will feed into a constitution-making process and pave the way for general elections in 2014.

Ms. Pansieri said the ongoing political transition in Yemen is clearly at a “critical juncture” and the National Dialogue Conference is a welcome initiative. “This has been a process of which Yemen can be proud, which can indeed even serve as an example of peaceful transition for other countries in the region,” she stated.

While she acknowledged that civil and political issues should receive the right priority, she also encouraged the authorities to pay attention to the economic and social issues and thereby the basic needs of the people of Yemen.

“Due attention to and achievements in this area would be crucial to complement the successful completion of the political dialogue,” she said. “Furthermore, it is necessary that human rights are taken into due consideration in the upcoming constitutional process…

“A strong message needs to be sent in the constitutional process with respect to women’s rights, children’s rights and the rights of the marginalized communities,” she added.

The Deputy High Commissioner lamented that “little progress” has been made on a draft law on transitional justice and national reconciliation.

“Addressing human rights violations that occurred in 2011 and earlier is necessary to rekindle trust among the citizens. Yemen would benefit from a holistic and comprehensive transitional justice programme that would seek to address the legacy of past violations in order to turn over a new leaf for the country.”

She also stated that the capacity of the judiciary to be free, independent and fair has been “put to the test” in the past few years, with senior judicial officials highlighting to her the serious challenges the sector is facing, the lack of resources and staffing and the need for capacity building in the area of international human rights standards.

Significant challenges have also been recorded with regard to the juvenile penal system, namely on the execution of minors charged with murder, said Ms. Pansieri. 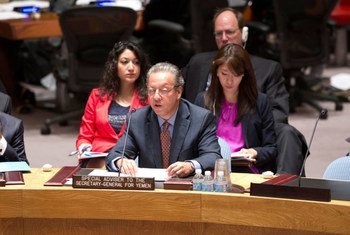