IRIN/Sanje Msiska
Malawian migrants fleeing attacks in Tanzania are stranded in the northern city of Mzuzu without funds to continue their journeys home.

2 October 2013
United Nations officials today highlighted the plight of international migrants, stressing that countries should increase efforts to protect their rights while finding ways to integrate their contributions to society into the post-2015 development agenda.

“Evidence clearly shows that migration contributes significantly to development,” the Deputy Secretary-General, Jan Eliasson, told reporters at a press conference on the eve of the General Assembly’s High-level Dialogue on International Migration and Development.

“Migrant and diaspora communities can bring about innovation, trade and investment. Migrants contribute to economic development as entrepreneurs by creating business start-ups and employment,” he said.

According to UN figures, migration continues to increase in size and scope. In 2000, there were 175 million international migrants compared to some 232 million in 2013. Half of them are women. The impact of remittance flows is also significant having reached $401 billion last year – nearly four times the $126 billion in official development assistance (ODA).

“These remittances improve the access to [among others] health and education of migrant families. Thus they contribute directly to the achieving of the Millennium Development Goals,” Mr. Eliasson said.

“At the heart of migration are human beings who move,” he added, reminding Member States of the need to protect their rights. “The term ‘migrants’ describes what they do but let us remember who they are: human beings with human rights.”

The report suggests that Member States should take collaborative action to reduce the costs of migration, such as lowering the transfer costs of remittances and fees paid to recruiters, especially by low-skilled workers.

The Special Representative of the Secretary-General on International Migration and Development, Peter Sutherland, pointed out that Member States are recognizing more and more the importance of international migration, but he expressed concern over the anti-migrant sentiment in many developed countries.

“Migration is a toxic subject and some of the liberal societies who were supportive in the early days of this issue have, as a result of electoral change […] become negative about migration,” he said, expressing his hope that tomorrow’s High-Level Dialogue will produce an agenda for action.

The Special Rapporteur of the Informal Interactive Hearings of Civil Society, Cathi Tactaquin, said she hoped the Dialogue will be a crossroads between “simply talking and action.” She also expressed her support for Mr. Ban’s report and reiterated civil society’s readiness to engage with the UN on this issue.

Also today, a UN Committee appealed to all countries to join a treaty that protects the rights of migrant workers, who are often the victims of exploitation and abuse.

“Ratifying this treaty does not commit States to giving migrant workers special treatment. It does not create new rights nor establish additional rights specifically for migrant workers. What it does do is give specific form to standards that protect all human beings so they are meaningful within the context of migration.”

The Convention, in force for a decade, has been ratified by 47 States. However, no major destination countries, among them the United States, member States of the European Union and Gulf countries, have ratified it, even though it reflects the rights set out in other core human rights treaties to which many States are already party.

“Migrants are not commodities. They not only contribute to the economic development of their own country and their host country, but keep host countries demographically young, enrich their cultures and add to their productive capacities,” Mr. El Jamri said. “But in order for migrants to be able to make this contribution, their human rights must be protected and respected.”

The Committee, composed of 14 independent human rights experts, oversees implementation of the Convention by States parties. Many of the States parties are not only nations of origin but now also transit and destination countries given the changing patterns of migration. 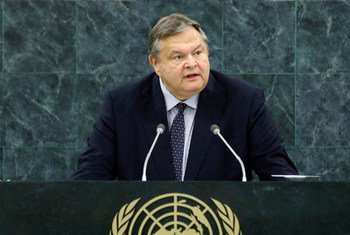 27 September 2013
In his speech to the United Nations General Assembly’s high-level debate today, the Deputy Prime Minister of Greece reiterated the importance of a national action plan on asylum and migration in his country and southern Europe overall.