With nearly one and a half million people in need of food assistance in Malawi, the United Nations, the Government and other partners have launched a relief operation to meet growing needs owing to bad weather and high food prices.

More than 1.46 million people will need food assistance in the coming months, according to the July bulletin of the Malawi Vulnerability Assessment Committee (MVAC), which is made up of the Government of Malawi, UN agencies and non-governmental organizations.

It is widely believed that this figure could increase significantly during coming months, the World Food Programme (WFP) said in a news release. The agency is preparing to scale up its relief operations, though the exact extent of the need will not become clear until after an MVAC assessment update, due to be carried out this month.

Some 1.9 million people needed food assistance in 16 districts during the last lean season. This season, as many as 21 out of 28 districts will be affected by hunger, according to the MVAC assessment undertaken in July.

While the most severe levels of need are expected in January to February – the height of the lean season – WFP and its partners are launching their relief operation in October since household food stocks in many areas are already depleted.

The Assessment showed that the most affected households experienced a 50 per cent decline in food production due to prolonged dry spells this year. Decreased production has also contributed to maize prices that are up to 100 per cent higher than last year.

“WFP is working with the Government and key partners to ensure that we can reach those most in need,” says WFP Country Representative Coco Ushiyama. “However, we’re racing against time to secure enough funding to pre-position food before the rains and before food and transport rates increase further.

“What’s more, the affected area is larger and more dispersed than in recent years.”

WFP and its partners will offer those in need a balanced food basket including maize, pulses, vegetable oil and SuperCereal, a fortified corn soya blend that can be made into a nutritious porridge. Cash transfers for the most vulnerable to buy their own food will also be used in areas where market conditions allow. 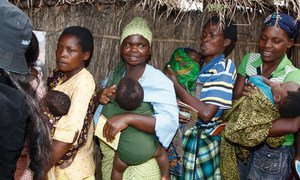 During a visit to Malawi, the head of the United Nations Food and Agriculture Organization (FAO) and the European Union (EU) Development Commissioner highlighted the need to address malnutrition and food insecurity in the African country, while pledging to work together and support the Government in its efforts to this end.