1 October 2013
Addressing the United Nations today, Israeli Prime Minister Benjamin Netanyahu warned that the only way diplomacy will stop Iran’s “feverish efforts” to acquire nuclear weapons is to keep up international pressure through “tough” sanctions to ensure that the country fully dismantles its weapons programme and is prevented from having one in the future.

“Last year when I spoke here at the UN I drew a red line. Now, Iran has been very careful not to cross that line but Iran is positioning itself to race across that line in the future at a time of its choosing,” Mr. Netanyahu said, referring to his speech to the Assembly’s 2012 General Debate.

Querying the Assembly, Mr. Netanyahu wondered why a country with vast natural energy reserves would invest billions in developing nuclear energy; or why a country intent on merely civilian nuclear programmes would continue to defy multiple Security Council resolutions and incur the tremendous cost of crippling sanctions on its economy.

“Why would they do all this? The answer is simple. Iran is not building a peaceful nuclear programme; Iran is developing nuclear weapons,” he declared, warning that “a nuclear-armed Iran” would have a choke-hold on the world’s energy supplies, and would trigger nuclear proliferation throughout the Middle East. “It would make the spectre of nuclear terrorism a clear and present danger.”

Yet Mr. Netanyahu said, “Iran faces one big problem, and that problem can be summed up in one word: sanctions.” He reiterated his long-held position that the only way to peacefully prevent Iran from developing nuclear weapons is to combine tough sanctions with a credible military threat. And, thanks to the efforts of many countries, that policy today is bearing fruit, he said, noting that, under the leadership of the United States, “tough sanctions have taken a big bite off the Iranian economy.”

“Lift the sanctions only when Iran fully dismantles its nuclear weapons programme,” he said, noting that with the measures in place, Iran’s oil revenues have fallen and its currency has plummeted. “So as a result, the regime is under intense pressure from the Iranian people to get the sanctions relieved or removed,” he said, adding: “The international community has Iran on the ropes. If you want to knock out Iran’s nuclear weapons programme peacefully, don’t let up the pressure.”

As to whether diplomacy could be used to stop the “threat” posed by Iran, he said the only diplomatic solution that would work “is one that fully dismantles Iran’s nuclear weapons programme and prevents it from having one in the future.” He added that US President Barack Obama has rightly said that Iran’s conciliatory words must be matched by transparent, verifiable and meaningful action.

Mr. Netanyahu said a diplomatic solution would require Iran to cease all uranium enrichment as called for by the Security Council, remove from its territory the stockpiles of enriched uranium, dismantle the infrastructure for nuclear breakout capability, and stop all work at the heavy water reactor in Iran aimed at the production of plutonium.

Turning to the Israeli-Palestinian peace process, he said that Israel “continues to seek an historic compromise with our Palestinian neighbours, one that ends our conflict once and for all.” Israel wants peace based on security and mutual recognition, in which a demilitarized Palestinian State recognizes the Jewish State of Israel, he said.

“I remain committed to achieving an historic reconciliation and building a better future for Israelis and Palestinians alike,” Mr. Netanyahu said, while acknowledging that he has “no illusions about how difficult this will be to achieve.” Still, his predecessors were prepared to make painful concessions. “So am I. But so far the Palestinian leaders haven’t been prepared to offer the painful concessions they must make in order to end the conflict.”

For peace to be achieved, he said, the Palestinians must finally recognize the Jewish State, and Israel’s security needs must be met. “I am prepared to make an historic compromise for genuine and enduring peace, but I will never compromise on the security of my people and of my country, the one and only Jewish State.” 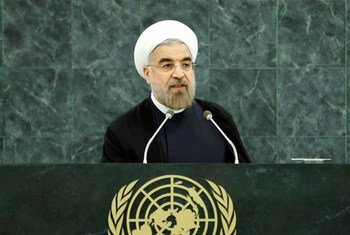