“In the real world in which we live, such healthy compromise is the best outcome of our joint effort. We are the ones responsible for finding such common ground,” Mr. Ashe said in his remarks at the close of the Assembly’s 2013 General Debate, for which he chose the theme, “The Post-2015 Development Agenda: Setting the Stage!”

The General Debate, which opened on 24 September, provided heads of State and other senior Government officials an opportunity to weigh in on the shape of the world’s development strategy for the period after the 2015 deadline of the Millennium Development Goals (MDGs), and a host of national and global concerns, such as poverty eradication, climate change, human rights, and a range of peace and security issues.

Mr. Ashe said the fact that virtually every speaker in the debate had pledged full support for the further elaboration by the UN of the post-2015 development agenda “heralds a sense of promise about what is to come over the next year,” and he trusted that Member States will be able to work collectively and creatively during the Assembly’s 68th session.

Building on achievements of the 2012 UN Conference on Sustainable Development – known as Rio+20 – he said many delegations stressed that work now needs to begin on defining a universal development agenda, inclusive of sustainable development goals, based on common but differentiated principles.

“We heard appreciation for the launch of the High Level Political Forum as the guardian and catalyst of this agenda,” he said, referring to the new UN body that was born of the Rio+20 outcome document and which will take over the work of the Commission on Sustainable Development, which held its final meeting last week.

Mr. Ashe went on to highlight other points he said Government leaders wished to see featured in the new agenda, including culture, education, job creation, non-communicable diseases, sustainable energy, water and sanitation, and protection of the world’s oceans. Democracy, human rights and women’s empowerment were also emphasized, as was the need to promote partnerships for development.

“We are the ones responsible for finding common ground. And with the directions and the reference points laid before us this week, it is now up to us to identify our common agenda and move forward on it,” he said, telling Member States: “We are responsible for the implementation of action by working to create a post-2015 development agenda.”

“We are oftentimes accused of being an organization that is all talk and no action. Perhaps so. But I submit that our general debates, which occur at this time each year, serve an important purpose; they help us to mark where we are as a global community, and they provide guidelines for where we need to go; they serve as a useful point of peer review and general accountability,” Mr. Ashe said, adding that the Assembly’s debates also show that despite any such negative elements, “faith in the value of our Organization as the world’s forum of nations continues to be high.”

“During the months to come and throughout the session, I look forward to working with all of you, and to realizing meaningful changes and progress,” he concluded. 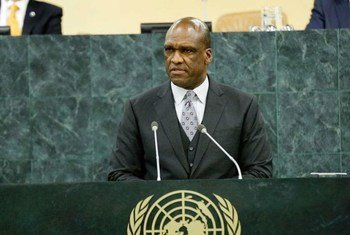 24 September 2013
As he opened the annual United Nations forum for world leaders today, the President of the General Assembly appealed to them to renew their commitment to work together to eradicate poverty and foster economic and social prosperity for people across the world through a new development agenda.