Some 74,000 tuberculosis deaths could be prevented each year through UN action plan

The deaths of more than 74,000 children from tuberculosis (TB) could be prevented each year through measures outlined in the first action plan developed specifically on TB and children, which was launched today by the United Nations health agency in Washington, DC.

The ‘Roadmap for childhood TB: towards zero deaths’ estimates that $120 million per year could have a major impact on saving tens of thousands of children’s lives from TB, including among children infected with both TB and HIV.

“Any child who dies from TB is one child too many,” said Mario Raviglione, Director of the Global Tuberculosis Programme at the World Health Organization (WHO). “TB is preventable and treatable, and this roadmap focuses on immediate actions governments and partners can take to stop children dying.”

Every day, more than 200 children under the age of 15 die needlessly from TB – a disease that is preventable and curable. WHO estimates that as many as 1 in 10 TB cases globally are among this age group, but that the number could be even higher because many children go undiagnosed.

The $120 million a year in new funding from governments and donors includes $40 million for HIV antiretroviral therapy and preventive therapy for children co-infected with TB and HIV. The funds will also go towards improving detection, developing better medicines for children and integrating TB treatment into existing maternal and child health programmes.

“Far too many children with tuberculosis are not getting the treatment they need,” said the Director of Programmes for the UN Children’s Fund (UNICEF), Nicholas Alipui. “Most of these children live in the poorest, most vulnerable households. It is wrong that any children should die for want of a simple, affordable cure, especially where there are community-based options to deliver life-saving interventions.”

The Roadmap recommends various actions at national and global levels, including collecting and reporting better data, developing training and reference materials on childhood TB for health workers, fostering local expertise and leadership among child health workers at all levels of health systems, and developing integrated family and community-centred strategies to provide comprehensive and effective services at the community level. 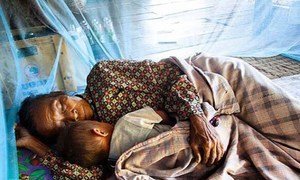