United Nations independent experts today called on Indian authorities to immediately halt the construction of a massive steel plant in the eastern state of Odisha – formerly known as Orissa – which threatens to displace more than 22,000 people Jagatsinghpur District and disrupt the livelihoods of thousands more in the surrounding area.

“The construction of a massive steel plant and port in Odisha by multinational steel corporation POSCO must not proceed as planned without ensuring adequate safeguards and guaranteeing that the rights of thousands of people are respected,” the experts stressed in a news release.

The experts brought their concerns to the attention of the Indian Government, as well as the POSCO corporation and the Republic of Korea (ROK), where POSCO is based, following allegations of human rights abuses and potential negative human rights impacts linked to the project.

“We call on the Government of India to live up to its ‘duty to protect’ and suspend the POSCO project while the alleged human rights concerns are being examined and addressed,” they said.

They also urged POSCO to respect human rights throughout all stages of their activities, ensure meaningful consultations with potentially affected stakeholders, carry out a human rights impact assessment, and act on and incorporate its findings into the project operations in order to avoid, mitigate, and ensure remedy any human rights impacts.

“Forced evictions constitute gross violations of human rights,” said the Special Rapporteur on adequate housing, Raquel Rolnik, “and may only be carried out in exceptional circumstances and in a manner consistent with human rights law, including after a genuine consultation, without leaving people homeless or vulnerable to further human rights violations.”

The Special Rapporteur on the right to food, Olivier De Schutter, warned that forcibly removing people from their lands could be tantamount to depriving them of their means of subsistence.

“People who would be evicted for the POSCO project have relied on their lands for generations in order to obtain adequate food and sustain themselves and their families,” he said.

The Special Rapporteur on extreme poverty and human rights, Magdalena Sepúlveda, stressed that people should not be impoverished in the name of development, and projects like these should not go ahead without the meaningful participation and consent of the community affected.

The POSCO steel project would also affect access to water and sanitation for residents in the area as it would withdraw an estimated 38 million litres (10 million gallons) of water every day from the water sources that supply the nearby cities of Cuttack and Bhubaneswar.

Catarina de Albuquerque, the Special Rapporteur on water and sanitation, pointed out that access to safe drinking water and sanitation for nearby residents must be guaranteed and prioritized ahead of the water required for large-scale investment projects.

According to the Special Rapporteur on freedom of peaceful assembly and association, Maina Kiai, “people in the project-affected area have reportedly been subjected to violence, harassment and intimidation, as well as arbitrary detentions and false charges, as a result of their activities to assemble peacefully and collectively defend their human rights.”

Residents have also expressed concerns regarding damage to the forest in their area, and Special Rapporteur on the right to health, Anand Grover, underlined that many of the people derive their livelihood from the forest, and this, as well as their right to a healthy environment, should not be deprived due to the proposed plant.

For his part, the UN Independent Expert on the promotion of a democratic and equitable international order, Alfred de Zayas, noted that respect for human rights requires transparent and accountable institutions and governance as well as the effective participation of all individuals and civil society.

The experts said they were encouraged by their initial dialogue with the ROK regarding this issue, and urged the Government of India to respond to their concerns “to ensure that the human rights of the affected people are fully respected and protected.” 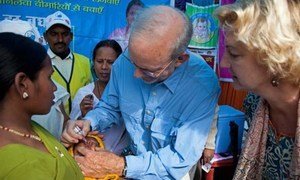 A €60 million contribution from the IKEA Foundation will allow the United Nations Children’s Fund (UNICEF) to reach millions of vulnerable children and women through health and education programmes, the world body announced today.